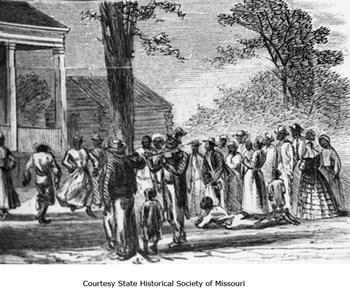 Slave owners both encouraged social bonds and broke them. The customs that developed among the slaves were a mix of Anglican and African traditions. Some of these customs continued long after slavery ended. Click on their names to hear the audio.

“Dey wasn’t allowed to marry. But if dey seen you talkin; to sombody like you was makin’ love, whether you love ‘em or no, dey make you live wid dem. Dat was marryin’ each other all right, but you ain’t got no papers an’ t’ings like dat.”

“We left my papa in Kentucky. My papa never knowed where my mama went, an’ my mama never knew where papa went. They never wanted mama to know, ‘cause they knowed she would never marry so long she knew where he was. Our master wanted her to marry again and raise more children to be slaves. Mama said she wold never marry again to have children, so she married my stepfather ‘cause he was sick an’ could never be a father.”

“Dey wuz a church, but we didden go much. ‘En we never had no kind ‘er gatherin’s. Dey wouldn’ let de cullered folks congregate, no suh.”

“I never knowed Sunday from Monday, ‘cept on Sunday the white man come and we are called out under the brush arbor, didn’ have no work in the fiel’ ‘at day, and he stand up ‘fore us and preach. I ‘member every preach day he say, ‘Mind you not to steal from Missis or Marster.’ He was plenty strong on that part.”

“De bes’ times we-ens had waz going fishing, an’ man, de we like to fish. Allus we had Saturday afternoon off, lessen it war wheat harvest ‘er somthin special like. En’ Sundays we allus fished all day long.”

“In ever’ cab’n thar war fiddles an’ on Sunday we could have a good time. One of de games we wud play out in front of the cab’n was ‘Swing Ole Liza Single.’ This here game waz play’d by havin’ two rows line up an’ a man wud dance up or down the line an’ swing each one. We wud all sing an’ pat our han’s an’ feet ta keep time for the dance.”

“In de evening when de work was done we would sit ‘round and play marbles an sing songs. We made our songs up as we went along. Sometimes dere would be a corn shuckin’ and dat is when we had a good time, be we always shucked a lot of dat corn.”