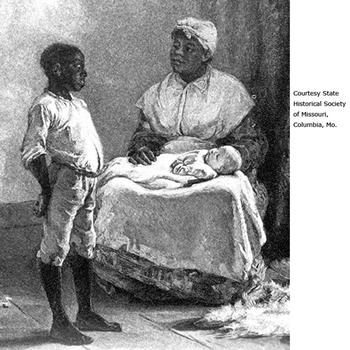 The work performed by slaves in Missouri was affected by the area’s unique landscape, natural resources, culture and status as a western state. Click on their names to hear the audio.

“Lord, when I thinks of de way we used to work. Out in de field before day and work till plumb dark. My boss would say, ‘George take two men, or maybe three men, and git dat field plowed, or dat woods patch cleared.’ And he knowed if he tell me, de work would be done. But what do dese young folks know ‘bout work? Nuthin’! Look at dat grandson of mine, just crossed de porch – why he’s fourteen and he can’t even use an ax. Too young? Go on with you! I tells you, dese young folk just don’t know how to work.” 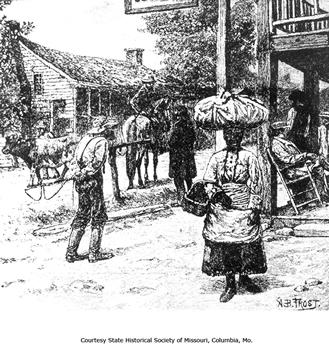 “Soon as I was big enough, about four or five years ole, ole miss, she starts trainin’ me for a house boy. I’s a doin’ all sorts of chores by de time I was six years old. Den ole marster he starts sendin’ me out on de plantation to drive up de hosses. I sho’ likes dat job ‘cause ain’t nothin’ I loves any better den hosses. Den when I was bigger he starts me to carryin’ de breakfast to de field whar de grown niggers had been out workin’ since way ‘fore day.”

“We worked hard on de farm. I cradled wheat and plowed corn often till midnight. We often drove hogs to Palmyra and Hannibal. When dere was no crops in de fields we made brooms and baskets.”

“My work in slave times was in the house of my master and mistress. I was taught to sew and had to help make clothes for the other slaves. I nursed all the children of the mistress and one time was hired out to the white preacher’s family to take care of his children when his wife was sick.” 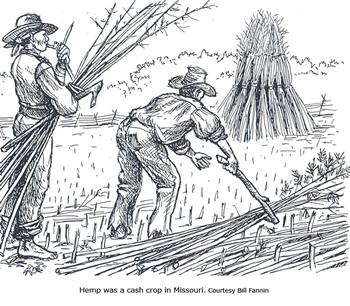 “We didn’t have to work none too hard, ‘cus we was so young, I guess. We cut weeds along de fences, pulled weeds in de garden and helped de mistress with de hoeing. We had to feed de stock, sheep, hogs, and calves… In de evenings we was made to knit a finger width and if we missed a stitch we would have to pull all the yarn out and do it over.”

“On the plantation we raised cows, sheep, cotton, tobacco, corn, which were our principal crops. There was plenty of wild hogs, turkey, and deer and other game.”

“My wife died when we had three children. She had had to work hard all her life and she said she didn’t want her children to have to work as hard as she had, and I promised her on her death bed that I would educate our girls. So I worked and sent the girls to school. My two girls both graduated from Ottawa University, the oldest one being the first colored girl to ever graduate from that school. The younger girl also graduated and went to teach school. I have worked at farm work and tree husbandry all my life. My oldest daughter bought me my first suit of clothes I ever had.”