In its preface to the National Historic Preservation Act of 1966, Congress declared that the preservation of historic properties "is in the public interest so that its vital legacy of cultural, educational, aesthetic, inspirational, economic and energy benefits will be maintained and enriched for future generations of Americans."

In addition, Congress acknowledged that, whether raising funds for small museums, maintaining their own homes, lobbying for the preservation of a local site or redeveloping underutilized commercial buildings, "the major burdens of historic preservation have been borne and major efforts initiated by private agencies and individuals."

In spring 1970, the private citizens who made up the state's review board approved Missouri's first statewide preservation plan. Again, it was one of the first such plans to be approved by the National Park Service. In 2018, following a series of public and agency meetings across the state, input from online survey participants, recommendations from citizens appointed to the Missouri Advisory Council on Historic Preservation, and approval by  the National Park Service, the Missouri State Historic Preservation Office finalized the newest version of the comprehensive, statewide historic preservation plan, Our Sense of Place: Preserving Missouri's Cultural Resources. The broad goals established in the planning process are joined in this document with a series of objectives and actions that can be taken by individuals, local preservation groups or government agencies to preserve and increase appreciation for our state's historic properties. The plan recognizes that these groups share a vision, but each play a different role in preserving the history and historic places of our state and communities.

For more information on historic properties, you can also browse the National Register nominations for properties in your favorite county. It will be obvious to you the dedication of the citizens who make up the Advisory Council and put in long hours reviewing the nominations that will, if approved by them, go on to the federal level for final review. Their meetings are a great place to witness citizen participation in the preservation of our "irreplaceable heritage." 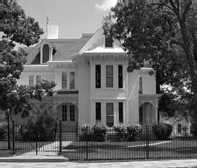 Among the Missouri sites listed at the national level of significance are the birthplaces of George Washington Carver in Newton County, and Harry S Truman, whose National-Register-listed birthplace in Lamar is managed by the Missouri Department of Natural Resources' Division of State Parks. The 33rd president is also represented by his Independence home – now a National Historic Landmark – where he spent most of his life. 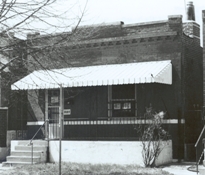 Also in private ownership are two modest but nationally significant residences on St. Louis' north side. One, whose purchase by J.D. and Ethel Shelley led to the U.S. Supreme Court's 1948 decision ending racial segregation by restrictive covenants, was listed as a National Historic Landmark in 1990. Not far away is the one-story house Chuck Berry purchased two years after the Shelley decision. It was here that Berry lived and worked while writing and recording “Maybellene,” “Rock and Roll Music,” “Sweet Little Sixteen,” “Brown Eyed Handsome Man” and “Roll Over Beethoven." It was listed in the National Register at national significance on Dec. 12, 2008.

Of course, listing in the National Register isn't the end of the process. In Columbia's downtown commercial district, it was the midway point.

As was the case in many communities, the rise of suburban shopping malls in the 1960s brought the urge to modernize Main Street shopping districts. For the owners of the Virginia Building – built in 1911 and one of the largest historic commercial buildings downtown – that meant wrapping the building's exterior in metal siding and removing interior walls and lowering ceilings to create the feeling of an indoor mall. Forty years later, the building was unwrapped, revealing enough integrity to allow its listing in the National Register. This made it possible to submit applications for state and federal historic rehab tax credits. The before and after pictures below tell the story of the impact that project made on the streetscape. 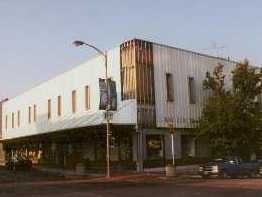 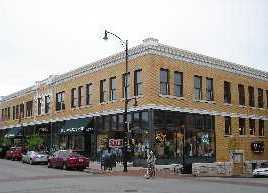 A couple of blocks away, another 1960s modernization – the construction of a large concrete canopy closely resembling an elevated highway along both sides of East Broadway – still hid the store fronts on several blocks of historic buildings. 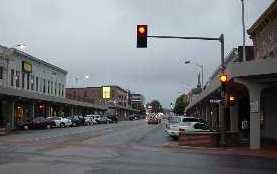 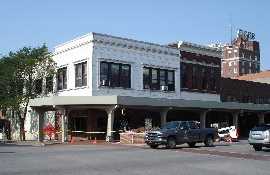 On East Broadway, concrete "canopy" from 1968 hid the store fronts and contents from shoppers.

That began to change in 2004 when two owners tore down the portions in front of their buildings. The removal allowed one owner to spruce up his building with less obtrusive canvas awnings and another to list his property in the National Register and begin the historic tax credit process.

Those successes paved the way for the district's Special Business Board to vote in support of removing the canopy. A small grant from the National Trust for Historic Preservation helped with the preparation of information packets for building owners. Once their support had been gained, a group of property owners paid for the removal of the canopy and the preparation of a National Register nomination. By the end of 2006, the canopy was history; the historic buildings were once again visible. The Downtown Columbia Historic District was listed in the National Register with 81 contributing buildings and rehabilitation of several buildings was underway. 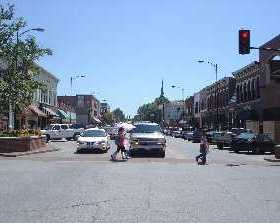 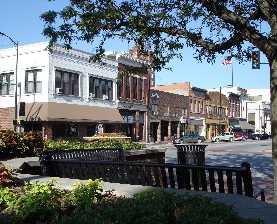 Property owners along East Broadway brought new life to the streetscape by removing the 1968 canopy.

Today – thanks to the efforts of property owners, with assistance from partnerships made possible by the actions of Congress and Missouri's General Assembly – the streetscape along Columbia's East Broadway commercial district has been transformed.

Similar "can-do" communities are spread across the state. Some – including Arrow Rock, Ste. Genevieve and St. Louis, which have been named Distinctive Destinations by the National Trust for Historic Preservation – are Certified Local Governments, officially partnering with the state and federal governments to support heritage education and the designation of the buildings important to their communities, often with the assistance of federal grants.

As always, the staff of the State Historic Preservation Office stands ready to assist, but – as was the case before the passage of the National Historic Preservation Act – it is private entities and individual citizens who decide what makes their community unique and how best to preserve that part of Missouri's "vital legacy of cultural, educational, aesthetic, inspirational, economic, and energy benefits will be maintained and enriched for future generations of Americans."