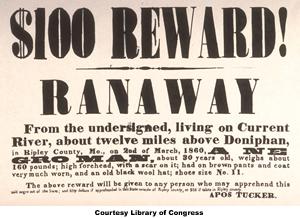 Although many slaves wanted freedom, very few were lucky enough to gain it before the end of the Civil War. To become free slaves had to risk running away, try to make money to buy their freedom or hope their masters would free them willingly. Federal and state laws restricted the life of free blacks and allowed fugitive slaves to be pursued anywhere in the country. In 1868, the 14th Amendment of the Constitution abolished slavery in the United States forever. Emancipation came to Missouri slaves in 1864 through state law. Click on their names to hear the audio. 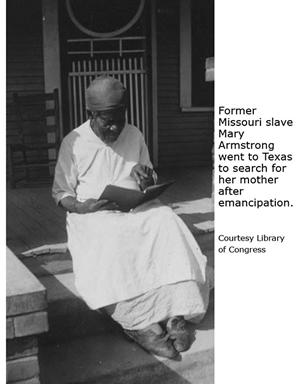 “Well you see I was a runaway nigga; I run away when I was about grown and went to Kansas. When de war broke out I joined de 18th United States Colored Infantry. . . I fit three years in de army. My old Marsa’s two boys just older than me fit for de south. Dey was mighty good boys, I liked them fine.”

“When freedom was declared Mr. Steele told me that I was as free as he was. He said I could leave them if I please or could stay, that they wanted me and would be glad to have me if I would stay and his wife said, ‘Course, she is our nigger. She is as much our nigger now as she was the day you bought her two years ago and paid $1,500 for her.’ That made me mad so I left right then… I hired myself out to a family named Miller’s at $3.00 a week, and lived on the place… I don’t know what the ex-slaves expected, but I do know they didn’t get anything. After the war we just wandered from place to place, working for food and a place to stay.”

“You know if you was raised from birth like dis you could stand it.”
“When I was freed I felt like I was goin’ into a new world.”