The rooms and houses slaves lived in varied widely in Missouri and were influenced by Missouri's hot summers and cold winters. In newly settled areas, the master's house and slave cabins were built of the same materials. Click on their names to hear the audio. 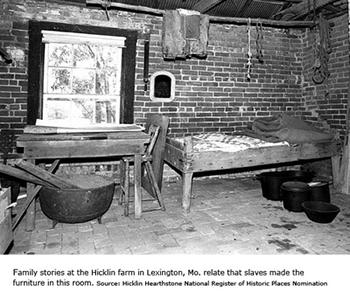 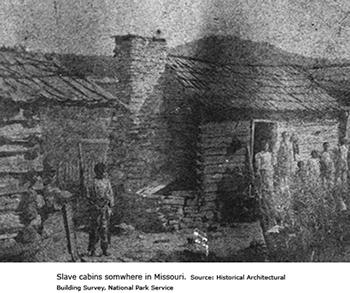 “My boss was John McWiggin. He had ‘bout 230 darkies on de place. We lived in log cabins. Dey had slip doors for de windows. Man, what you talkin’ ‘bout? We never saw window glass.”

“Dey keep us in de back, little bit o’ house no bigger’n a chicken house where you eat and sleep. We made de kind o’ beds we had in dem days. You see dese posts here? Well, you take t’ree or fo’ of ‘em put togedder and make a bed out of dat and you take dis bark off trees an’ make slats out of dat, an’ deses here towsacks an’ sew ‘em togedder. You put shucks in dat to make de matress an’ make de pillows de say way.”

“Mr. Coffman had a whole row of slave cabins. Our cabin war small an’ we had a corded bed, trundle bed ta slip unda’ the big bed ta save room, home made split bottom chairs, tin plates, wooden boxes, an’ a fireplace.”

“Log cabins, that’s what they was. All in a long row- piles of ‘um. They was made of good old Missouri logs daubed with mud and the chimney was made of sticks daubed with mud. Most of the negroes cooked in the cabins. They mostly used dog irons and skillets, but when they went to b’ile anything, they used tin buckets.”

“The slaves usually lived in a two-room house made of native lumber. The houses were all small. A four or five room house was considered a mansion.”