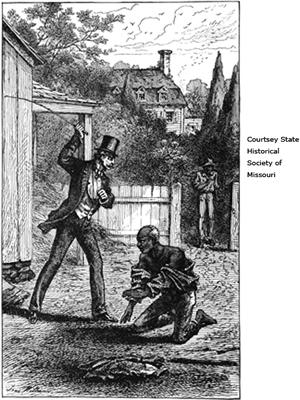 There is no such thing as a "good slave owner," yet former Missouri slaves judged those who kept them in bondage using that term. However, good treatment could not get rid of fear or replace the desire for freedom. Slave owners had the right to punish their slaves at any time for any reason. Punishment could include physical harm, lack of food, taking away a privilege such as visiting family, or being sold far away. The fear of punishment was the reason slaves stayed slaves. Click on their names to hear the audio.

“Dey shore wuz mean to us but God bless you, dey’s all daid an’ gone an’ de Lawd has spared me.”

“Our home was not pleasant. The mistress was cruel. Her brother would go down in de orchard and cut de sprouts and pile ‘em up under de house so as de mistress could use ‘em on us. She also used a bed-stick to whip with. One day we took de cows to pasture and on de way home I stopped to visit Mrs. Walker and she gave me a goose egg. And den when we got home de old mistress kicked me and stomped on us and broke my goose egg. Didn’ mind de whipping but sure hated to break my egg.”

“I have seen many a scar on my mother. She had mean white folks. One day her mistress…left a lot of work for my mother to do. She was only a girl and it was too much. When her old mistress came back and her work was not all done she beat my mother down to the ground, and then she took one of the skillets and bust her over the head with it. I have seen the scar with my own eyes. It was an awful thing.”

“Slaves were never allowed to talk to white people other than their masters or someone their masters knew, as they were afraid the white man might have the slave run away.”

“My master let us come and go pretty much as we pleased. In fact, we had much more freedom dan most of de slaves in those days.”

“We wuz de only slave family Masta’ had en’ he wuz good to us. Only one time masta whip me.”