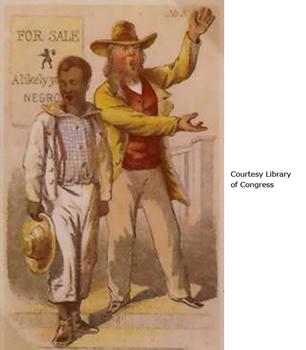 Slaves lived with the harsh reality that they could be sold or relocated at any time. Because Missouri was on the frontier, fewer slaves lived their entire lives within its borders. This uncertainty made forging and maintaining family and community bonds very difficult if not impossible. Click on their names to hear the audio. 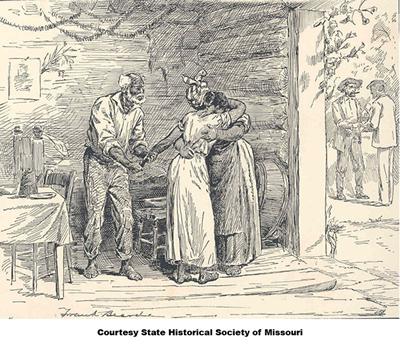 “I remember that my mother used to gather us children around her and pray that we would not be separated. She was separated from her parents when eleven years old and brought to Missouri from Tennessee. She never saw any of her folks again and the last words her mother said to her was, 'Daughter, if I never see you again any more on earth, come to heaven and I will see you there.’”

“I've seen slaves go through Danville in droves like cattle. Dey was chained together and dey walked 'em to St. Louis to de nigger yard. One mother gave out. De man in charge made her give her baby away, she couldn't carry it no further. Someone near Danville raised de baby.”

“A man by de name of Grigsby was a slave buyer. It was like you would want a hog or cow and dey would put slaves on de block and ‘cry the off.’

You have got to make a profit on de deal. A good strong man would sell for $300 and some for $100. A house slave was worth more den a field slave.”

“Mr. McCann was a rich slave holder. His daughter… was married to a Mr. Dawson and lived in Liberty. When I was ‘bout eight years old de Dawsons come back to Paris to visit. Dey had two children den so dey took me as a nurse for de children…. My mother had to stand dere like I wasn’t hers and all she could say was, ‘Be a good girl, Margaret.’”

“We calls it ‘puttin’ ‘em on the stump.’ But the ‘stump’ were neither block or stump, it were a

box. Big wooden box… We always knowed when they was going to sell, cause they would let them lay around and do nothin’. Jest feed them and git fat. They even smeared their faces with bacon rine to make ‘em look greasy and well fed afore the sale. They never had no grease to eat only now and then. Masta’ Warren he makes it look like them niggers is well fed and cared for.”

“A man who owned ten slaves was considered wealthy, and if he got hard up for money, he would advertise and sell some slaves.”

“I knowed of only one slave in our family dat was sold, and dat was my Aunt Harriet. She was sold on de block down on Fourth Street right here in Hannibal. I was only five or six years old den.”

“My master’s father, before he died, told his chillun, dat at his death he wanted each child to put their slaves out to work until dey earned $800 a piece, to earn their own freedom, in dat way each slave paid it dem selves. He did not believe it was right to keep dem in slavery all their lives.”

“One time I tell him, you better put me in your pocket (sell me) Master Jim, else I’se going run away. He don’t pay no mind and I don’t try to runaway ‘cause of the whips. I done see one whipping and that enough. They wasn’t no fooling about it. A runaway slave from the Jenkin’s plantation was brought back and there was a public whipping, so’s slaves could see what happens when they tries to get away.”

“My father come from Virginia and my mother from Kentucky when dey was little. Dey never seen dere parents no more. Dey watched for a long time among de colored people and asked who dey was when dey thought somebody looked like dere parents, but never could find dem.”