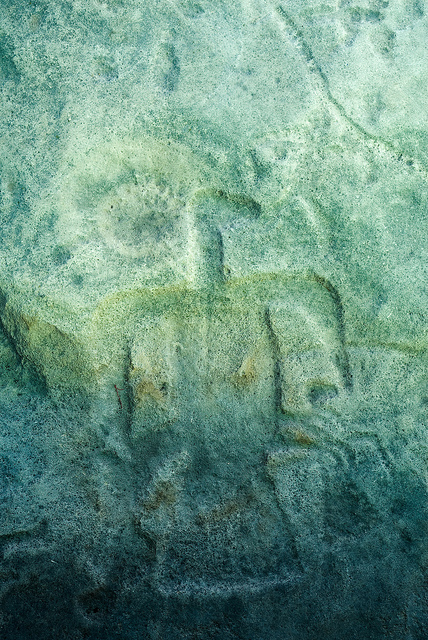 Washington State Park is perhaps best known as having been the location of prehistoric ceremonies associated with the American Indian culture that archaeologists call Mississippian. Petroglyphs, or rock carvings, remain as evidence of their beliefs, and give clues to understanding the lives of these people who are believed to have inhabited the area around A.D. 1000. The park contains the largest group of petroglyphs yet discovered in Missouri. Because of the number and exceptional quality of the carvings, these sites were placed on the National Register of Historic Places in 1970.

The petroglyphs are not Washington State Park's only claim to masterful craftsmanship in stone. After the initial portion of land was donated to the state for a park in 1932, Company 1743, an African American company of the Civilian Conservation Corps, began to develop the area. They were inspired by American Indian petroglyph symbols in the area, naming their barracks "Camp Thunderbird." Company 1743 built a stone dining lodge, carving an American Indian thunderbird symbol into its stone chimney and creating handmade iron door hinges. The building, known as Thunderbird Lodge, now serves as a convenience store and the cabin/watercraft/float trip check-in location. The stonemasons also did extensive roadside work, laid stone for what is known as the 1,000 Steps Trail, and worked on 14 buildings, including an octagonal lookout shelter of interesting rustic design. The exceptional quality of their craftsmanship in stone earned them high praise in the National Register of Historic Places' citation for the park.

Representing both characteristic and unique features of the eastern Ozarks, Washington State Park contains a rich mixture of native forests. The Washington State Park Hardwood Natural Area, bordering the Big River flood plain, is moist and robust with a wide assortment of trees. Under the canopy of tall Kentucky coffee, sugar maple and slippery elm trees, the ferns and wildflowers mingle with understory pawpaw and bladdernut trees. In early spring, the natural area hosts one of the park system's most spectacular wildflower shows as blue-eyed Marys, celandine poppies, bluebells, trilliums and violets burst into bloom. 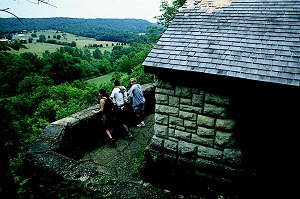 In contrast, on the hills above are limestone glades and savannas, which are remnants of the area's earlier, presettlement appearance. These open forests and sparse grasslands are scattered throughout the park's uplands and along most of the trails. The trees are often quite small, even though they may be more than 200 years old. Many of the flowering species found on these glades, such as Fremont's leather flower, the delicate blue-violet nemastylis and a rare primrose, are found in few other parks.

Another notable natural feature of the park are the towering dolomite bluffs overlooking the Big River, a popular floating and canoeing waterway. Below the bluffs, anglers enjoy catching bass, catfish, bluegill and carp. Swimmers and sunbathers have a choice between a natural gravel bar in the river or an ADA accessible swimming pool that includes a waterslide. Two scenic overlooks provide majestic views of the Big River and surrounding area. The first is a gazebo. The second overlook is accessible only by foot along the 1,000 Steps Trail. Year-round, naturalist staff lead a variety of programs to explain the significance of the park features.

There are three marked hiking trails, including 1,000 Steps Trail, Opossum Track Trail along the bluffs overlooking the river, and the more rugged Rockywood Trail, on which backpack camping is allowed.

Other campers can make use of both basic and electric campsites at the campground, which includes a dumping station and two modern restrooms/showerhouses. One- and two-bedroom, air-conditioned cabins with fully equipped kitchens are available for rent. A special-use camping area is also available for organized groups.