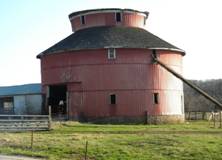 Did you know that Missouri ranks second in the nation in the number of barns? And that barns, out buildings and even the fields nearby can tell us a lot about our past?

While thousands of buildings and other resources in Missouri have been recorded, it is estimated that only 10% of the state has been surveyed. The State Historic Preservation Office encourages the recordation and study of Missouri’s built environment and provides guidance and technical assistance to communities, agencies, and interested members of the public. It additionally maintains an inventory of architectural surveys conducted throughout the state, some of which are available online. Information regarding archaeological surveys can be found here.

Architectural surveys provide an inventory of the built environment by systematically documenting intact structures by location or theme. They record construction dates, note architectural details, identify styles or types, note alterations, assess current conditions, and provide brief histories of properties. Reflecting the time they are conducted, surveys provide a “snapshot” of a given area and are often the first step in preservation projects. As the saying goes, “you have to know what there is to save before you can save it.”

Architectural surveys are tailored to fit the needs of a project. Commercial buildings, residences, military facilities, cemeteries and rural landscapes are all examples of the type of resources architectural surveys document. They can be utilized in large cities, sparsely populated areas, or even a single site such as a rural farmhouse and its associated outbuildings.

For these reasons, architectural survey is useful in community development and planning projects. If a city is aware of its historic resources it is better equipped to plan sympathetically around those resources whose preservation may have both economic and environmental benefits.

Types and Levels of Architectural Survey

There are two primary levels of architectural survey: reconnaissance and intensive.

Reconnaissance level surveys collect fundamental information derived from fieldwork such as an architectural description of a building, its construction date, and current condition. They are often utilized to record large areas where previous research is lacking. Reconnaissance or “windshield surveys” as they are sometimes called, provide a catalog of properties that can be useful in planning projects. They are also used to identify individual or concentrations of historic resources that are worthy of more study.

An intensive level survey records the same information as a reconnaissance level survey but places more emphasis on research. The history of each property is provided on an inventory form and the historic context and development of the survey area is considered in a survey report. Among the benefits of contributing to our knowledge of the past, intensive level surveys can provide the basis for nominations to the National Register of Historic Places.

In addition to recording information in a specific locality, architectural surveys can be used to explore broader contexts. Thematic surveys identify resources that are part of a pattern or theme. For example a thematic survey could be organized to record railroad properties in Kansas City, Tudor architecture in Cole County, or a statewide survey of pre-1960s barns and farmsteads. SHPO staff used data from rural architectural surveys to develop an identification guide, "Rural Churches of Missouri: A Study of Architectural Types 1819 to 1945."  This booklet provides an overview of the state's most common rural church building types and can be used as a resource for rural surveys or National Register nominations.

Survey methodology varies depending on the level of survey. At a minimum, an architectural survey will consist of inventory forms, photos and a map but generally the survey process is initiated via a research design, fieldwork, research, and compiling the results in a survey report.

A research design states the objectives of the survey (identifying National Register eligible properties, for example) and serves as a preliminary outline of the project. It provides a project timeline, sources of research, and considers potential problems that may occur while conducting the survey (vegetation obscuring properties in photographs, time or budget constraints, etc.). Fieldwork involves the physical collection of data. A field or inventory form is completed and photos are taken of each surveyed resource. Their location is noted on a map that includes the survey boundary.

Research may come before, after, or during fieldwork and would include examination of individual properties and the survey location as a whole. Sanborn maps, plat maps, tax records, county histories, local citizens, local libraries and museums are all examples of resources commonly utilized in survey work. Finally, the survey report discusses the results of the project. Sections of a survey report include methodology, geographic description of the project area and the architectural styles and types present in the survey boundary. If it is an intensive level survey the report will also include a discussion of the various historic contexts that may have been discovered during the survey project. For example, research may reveal a neighborhood’s development was the result of social or political factors such as racial segregation, or advances in transportation such as the construction of a streetcar line. Regardless of the level of the survey, the survey report will conclude with a results and a recommendations section. This would include identifying National Register eligible properties and recommendations for future research.

A basic understanding of architectural terminology, safe fieldwork practices and historic research are the fundamentals of a good survey. Knowledge of National Register criteria is helpful to determine areas of significance that may warrant further investigation.

The following inventory forms and instructions were designed by SHPO staff to assist in providing the information necessary for architectural surveys:

Instructions for surveying barns and farmsteads

The forms and instructions above are also the starting point for professionals conducting more in-depth surveys. The SHPO helps fund such surveys in eligible communities via grants to Certified Local Governments. Professional surveys follow all steps of survey methodology and are completed by professionals who meets qualifications outlined in 36CFR61, Appendix A. For a survey to be considered professional, it must meet the SHPO's Standards for Professional Architectural and Historic Surveys. ​

Survey Requirements for Nominating Large Districts to the National Register

Surveys are required 90 days in advance of a nomination submission for those districts that contain over 75 primary properties. These requirements are described in the introductory chapter of the Missouri Guide to the National Register Process.