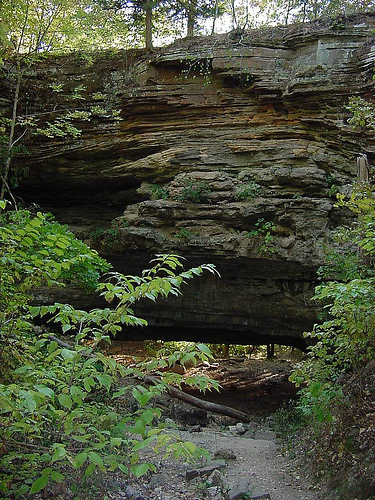 Ha Ha Tonka State Park is Missouri’s premiere showcase of karst geology and is unique in the quality and number of its remarkable geologic features. Karst topography is the result of the dissolving action of water on the bedrock and is characterized by caves, sinkholes, springs and natural bridges. It’s easy to see why Ha Ha Tonka State Park is a karst showcase, since it has a natural bridge that is 70 feet wide, spans 60 feet and reaches more than 100 feet in the air. Beyond the natural bridge is the Colosseum, a theaterlike sinkhole that was formed by the collapse of a giant cavern and measures 500 feet long and 300 feet wide. Legend tells of it being used for tribal meetings and church revivals.

The collapse of a giant cavern created a gorge with 250-foot-high bluffs, an impressive setting for Ha Ha Tonka Spring. The spring, Missouri’s 12th largest, discharges more than 48 million gallons of water daily into the stream that flows into the Lake of the Ozarks. As a result of the collapse, two narrow water-filled channels remained, leaving a very steep-sided island between the channels. This island features an intriguing Balanced Rock formation and Island Cave. 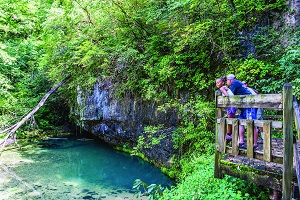 The majority of these karst features are preserved within the 70-acre Ha Ha Tonka Karst Natural Area. Trails and boardwalks make it easy for visitors to experience this honeycomb of caverns and sinkholes. Visitors can peer into caves, trek around sinkholes or climb from the spring to the castle on wooden steps that circle the spring chasm. The visitor center features a large relief map of the park.

Although the karst landscape may provide the most dramatic features, the park also boasts one of the best oak woodlands in the Missouri Ozarks, with almost 3,000 acres preserved in Ha Ha Tonka Oak Woodland Natural Area. The wooded landscape features prairie grasses of little bluestem and Indian grass that flourish among gnarled post oak, black oak, white oak and black hickory, some that are more than 300 years old. The landscape provides an ever-changing show of wildflowers such as Indian paintbrush, yellow coneflower, blazing star and aromatic aster. Scattered around the landscape area are open, rocky glades that support plants and animals that are similar to those of southwestern United States. 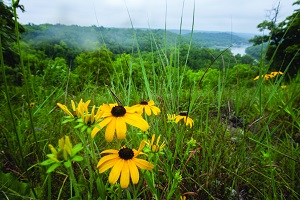 Throughout the woodlands, visitors may see a broad-headed skink, five-lined skink, northern fence lizard, or six-lined racerunner scurrying over rocks and logs. Striped bark scorpions and Missouri tarantulas can be found on the glades. Woodland birds like red-headed woodpecker, summer tanager, blue-gray gnatcatcher, black-and-white warbler and eastern wood-peewee can be spotted among the scattered oaks and hickories. Several trails lead visitors through this area.

The park’s woodlands are managed and restored to their historic natural condition through the use of carefully planned prescribed burns. These prescribed burns emulate the historic wildfires that often swept through the Ozarks, maintaining an open landscape. The controlled fires help restore the natural life cycle of the woodlands by releasing nutrients into the soil and by controlling invading brush that would crowd out the native woodland plants.