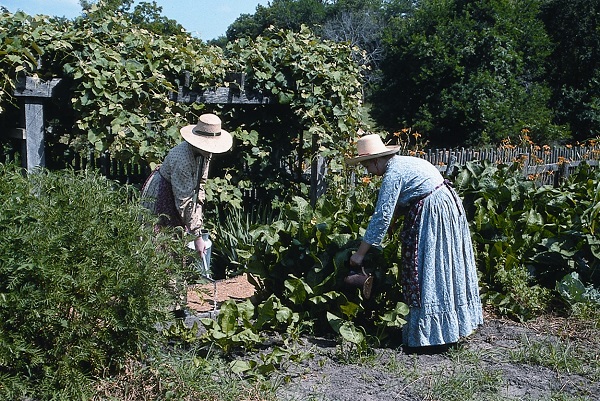 The vegetables, fruit, herbs and flowers raised in the Watkins Mill garden are varieties that were available prior to 1880. Planted in a combination of raised beds and open plots of vegetables surrounded by herb and flower borders, the garden is based on descriptions of the Watkins garden and gardening practices in use in Clay County during the 1870s.

Today many of the world's food plants are disappearing, including vegetables, grains and fruit varieties. Some 70% of the world's major food plants have already been lost. Because modern agriculture requires high yield, uniform plants, the genetic base of the world's food plants has been greatly reduced. This has created reliable crops but has left agriculture dependent on a few, closely related varieties of each crop. When a blight or disease does get into one of these crops, it can spread rapidly, causing widespread crop failure. One of the best known is the blight-induced failure of the Irish potato crop in the 1840s. The result was the Great Famine in which almost two million people starved to death. Similar failures have happened to every major food crop in the world, including wheat, corn, potatoes, rice, tomatoes, coffee and chocolate. In each case farmers turned to the old traditional varieties to save the commercial crops.

It is vitally important that the older varieties, with their varied genetic base, be preserved. Without them the world food supply is at risk. Watkins Mill is part of a network of living history farms, individuals and organizations such as the Seed Savers Exchange, who preserve the non-commercial varieties and exchange heirloom seeds, keeping the old varieties healthy. For more information, write to Seed Savers Exchange at 3076 North Winn RD, Decorah, IA 52101 or call (319) 382-5990.