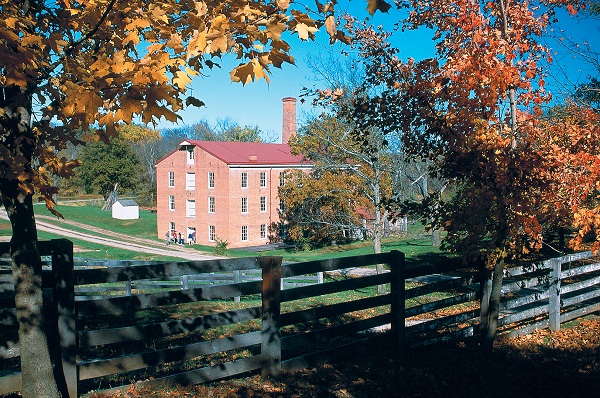 In 1870, there were more than 2,400 small, local woolen mills in the United States. They were located in every state, including the Deep South. Today, Watkins Mill is the only one remaining with its original machinery still in place.

Like the plantation home Watkins built earlier, the mill was constructed of brick handmade at the site, and supported by timbers cut from his land. Large for a rural factory, the mill contains more than 50 major textile machines, which were shipped by railroad from the east. The steam engine and the 30 foot riverboat boiler that powered it were shipped by steamboat from St. Louis.

The mill opened in 1860. During the Civil War, Watkins did a steady business selling cloth, although raids in 1864 by bushwhackers forced him to temporarily close the woolen factory and the gristmill. He expanded the carding, spinning and weaving operations in 1863 and added new, more advanced looms after the war. Forty mill workers processed 40,000-60,000 pounds of wool into fabrics, blankets, shawls, knitting yarns and batting each year. The woolen mill continued to prosper through the 1870s. In the mid-1880s, the woolen industry began to fail in Missouri and other parts of the country. The Watkins family gradually cut back on textile production and Watkins Mill closed in 1898. Unlike the hundreds of other woolen mills closing throughout North America, Watkins mill was not scrapped out or converted to serve a different business.

The gristmill, constructed in 1849, was moved inside the factory building sometime in the 1860s. An Oliver Evans-type mill with two sets of French buhr stones, it produced flour and cornmeal for sale through stores, and also did custom grinding for local farmers until 1905.