Flags at the Confederate Home 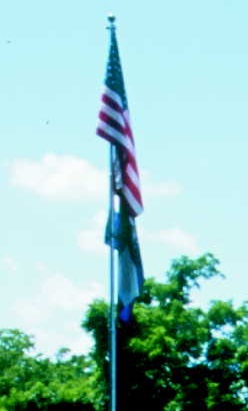 During the planning stages (prior to the state of Missouri taking over ownership of the home), the home board members expressed their intentions to fly the United States flag atop the large main building. “We have made a splendid beginning. Everything is paid for, and $15,000 in our inside pocket for the main building. With that much more, up she goes, with a big pole on top, and the Stars and Stripes flying big enough to be seen clear to Lexington…” (Higginsville Advance, Sept. 25, 1891)

In a letter from a resident dating March 7, 1924, “Old Glory floats on high above our large water tower and can be seen for miles in every direction…” (Letter to Mrs. Lettie Pierce, Walla Walla, Texas. March 7, 1924, Confederate Memorial State Historic Site archives)

The Confederate battle flag was brought out for funerals and special occasions. In those instances, it was hand carried, draped on a casket or displayed on temporary stanchions.

The Kansas City Star reported the following in Jim Cummins’ obituary July 11, 1929, “They will lay Jim away in the Stars and Bars tomorrow. The Stars and Stripes float over the home here, but the men who live in it still revere the Confederate flag and when one of their comrades goes to join the ranks of others who have departed they drape his casket in the southern flag.”

A newspaper article from the 1920s expresses the pride of a veteran who raised the United States flag routinely. “One of the sights at the home is to see J.R. (Rocky) Moore, a member of Company B, Colonel Wheat’s Division of the Confederate Army, raise the American flag each morning and haul it down at sunset. Never greater love shown in a man’s face than in his when he takes Old Glory out to let the breeze caress her colors. Never greater reverence glows in any man’s eyes than in his when he carefully lifts her from the staff, keeping her hem from touching the ground, and bears her away to her resting place for the night. Hero of a bitter war, enemy of the flag he now guards so carefully, Rocky Moore testifies to the goodness of Mr. and Mrs. Chambers (superintendent of the home) in making him standard bearer of the Nation’s colors at the home.” (Unidentified newspaper clipping, UDC scrapbook, Columbia: Western Historical Manuscripts Collection)