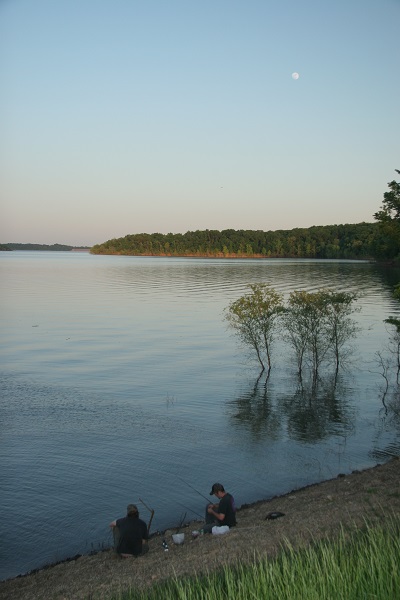 Nestled in southeast Missouri, land once used by American Indians and pioneers to feed their families has been transformed into a recreation haven at Lake Wappapello State Park. North American Indian tribes, including the Shawnee, Cherokee, Osage and Delaware, originally settled the area. Legend has it that the town of Wappapello was named after a friendly Shawnee chief who hunted the forests during pioneer days.

The first pioneer, Isaac Kelly, came to the area in 1802. Settlers cut timber and farmed the land, and soon the Frisco Railroad established the town of Wappapello as a railway station. The Allison family owned the land, which now comprises Lake Wappapello State Park, from after the Civil War until the early 20th century. In 1938, the U.S. Army Corps of Engineers began construction of a dam to control flooding along the St. Francis River, thus creating Lake Wappapello. The state began leasing 1,854 acres of land from the Corps of Engineers in 1956.

The valleys and chert hillsides contain a variety of trees characteristic of the southern Ozark plains and the southeastern coastal plains. These include a variety of oak and hickory, red buckeye, beech and tulip trees. Vegetation in the park consists of ferns and orchids in the shaded areas, and birdsfoot violets, pussy’s toes on the sunny slopes. Mistletoe, which grows in the black gum trees and sycamores along the edge of the lake, is a special feature rarely found in Missouri.

An abundance of waterfowl may be seen along Asher Creek and in the nearby cove, which is designated as a winter waterfowl refuge. Visitors should watch for wintering birds, such as eagles, ospreys and a number of duck species. Other inhabitants include great blue herons, multitudes of songbirds, and barred and great horned owls.

Visitors can take in all of these natural features while exploring several miles of trails that wind their way through the park. Lake Wappapello Trail, designed for hiking, backpacking, equestrian and all-terrain bicycling, wanders through varied and rugged Ozark upland terrain. Another hiking trail follows the edge of the lake, past the Allison Cemetery, and up the ridge where visitors can enjoy a superb view of the sun setting over the lake. Asher Creek Trail includes a hike along the waterfowl refuge area of the lake. For a less strenuous walk, Lake View Trail offers a scenic route near the picnic area.

Lake Wappapello’s clear Ozark waters can easily be accessed via the park’s three boat ramps for fishing or water skiing. Fishermen can cast their lines in hopes of reducing the lake’s excellent population of white bass, crappie and bluegill, as well as largemouth bass and catfish. Swimmers gain access to the lake at the park’s sand swimming beach. Swimmers, boaters and hikers all have easy access to picnic and day-use areas, which include picnic sites, shelters and playground equipment.

Visitors wishing to stay overnight have two lodging options. Nine modern cabins with kitchens are available with advance reservations. Perfect for families, these air-conditioned and heated cabins come equipped with linens, kitchen supplies, picnic tables and grills. Four rustic camper cabins are also available for reservation. Campers have a choice of two campgrounds -- one perched on the ridge and one nestled near the lake. Each campground features hot showers, modern restrooms, laundry facilities and sanitary dumping stations. Campsites range from basic to electric hookups.