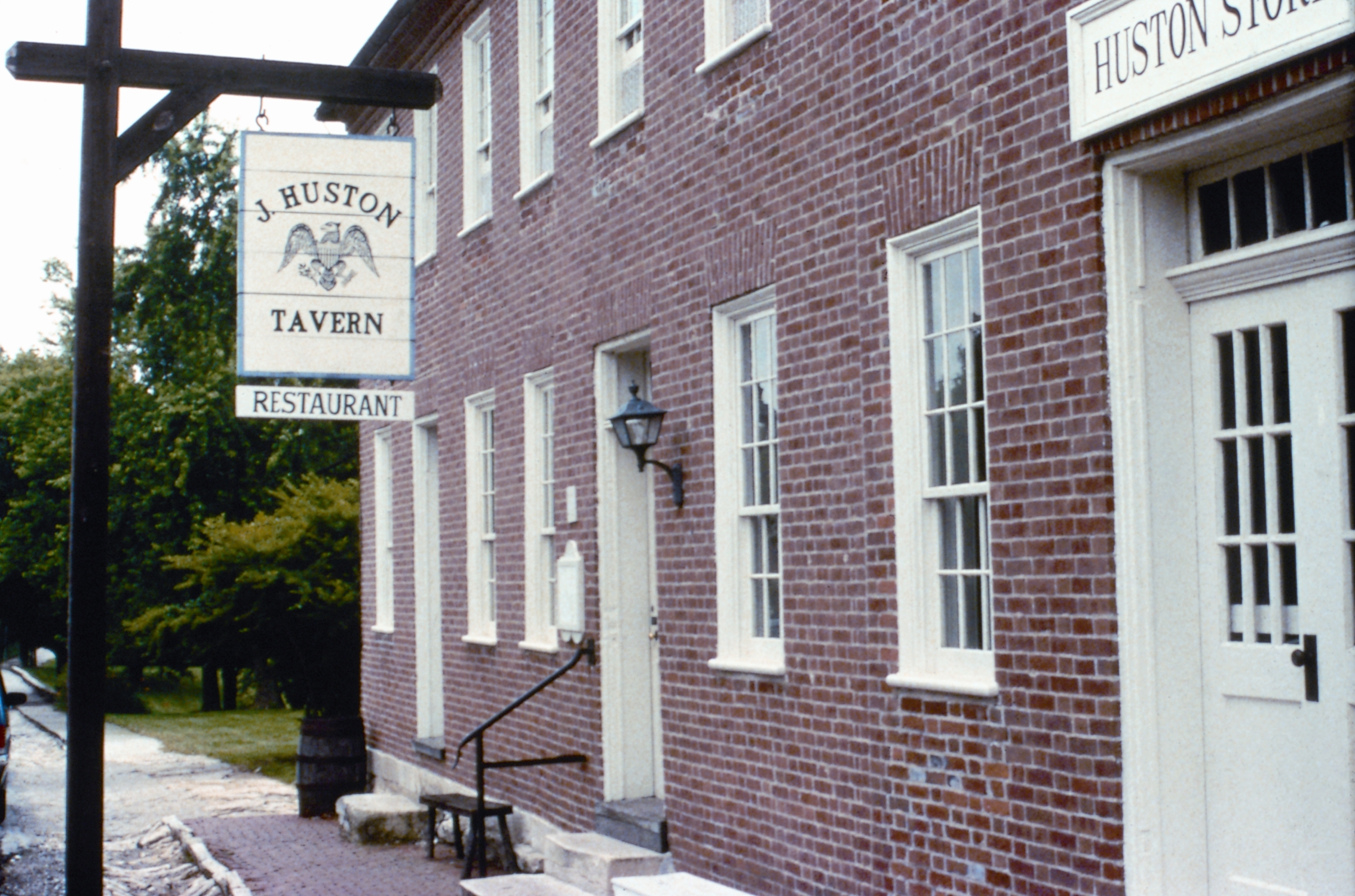 From the earliest days, the Arrow Rock bluffs were a well-known landmark on the Missouri River. Visible for many miles, they first appeared on a French map in 1732, noted as "pierre á  fleche" -- the "rock of arrows."  The origin of this name was first explained in 1819; “Arrow Rock is so-called from its having been formerly resorted to by neighboring Native Americans, for the stone used to point their arrows.”

During the War of 1812, hostile American Indians, allied with Great Britain, forced a withdrawal to the east, and the Fort Osage trading post, which had been located just east of present-day Kansas City, was moved to the Arrow Rock bluff, and the Osage Tribe was settled temporarily nearby.

As the "Boone's Lick Country" began to be more settled and more people moved into what is now Saline County, a ferry was established by 1815. The ferry linked the Arrow Rock community with the boom town of Franklin and Howard County on the north bank of the river.

In the 1820s, the earliest travelers on what would become the Santa Fe Trail crossed the river on the Arrow Rock ferry. Local tradition holds some of the Santa Fe caravans filled their water barrels at the Big Spring before heading west. The spring still flows today at the base of the hill behind the J. Huston Tavern.

In 1829, a town was formally platted on this site under the name of New Philadelphia, but this grandiose designation did not last long, and in 1833, it was changed to Arrow Rock to coincide with the landmark bluff. 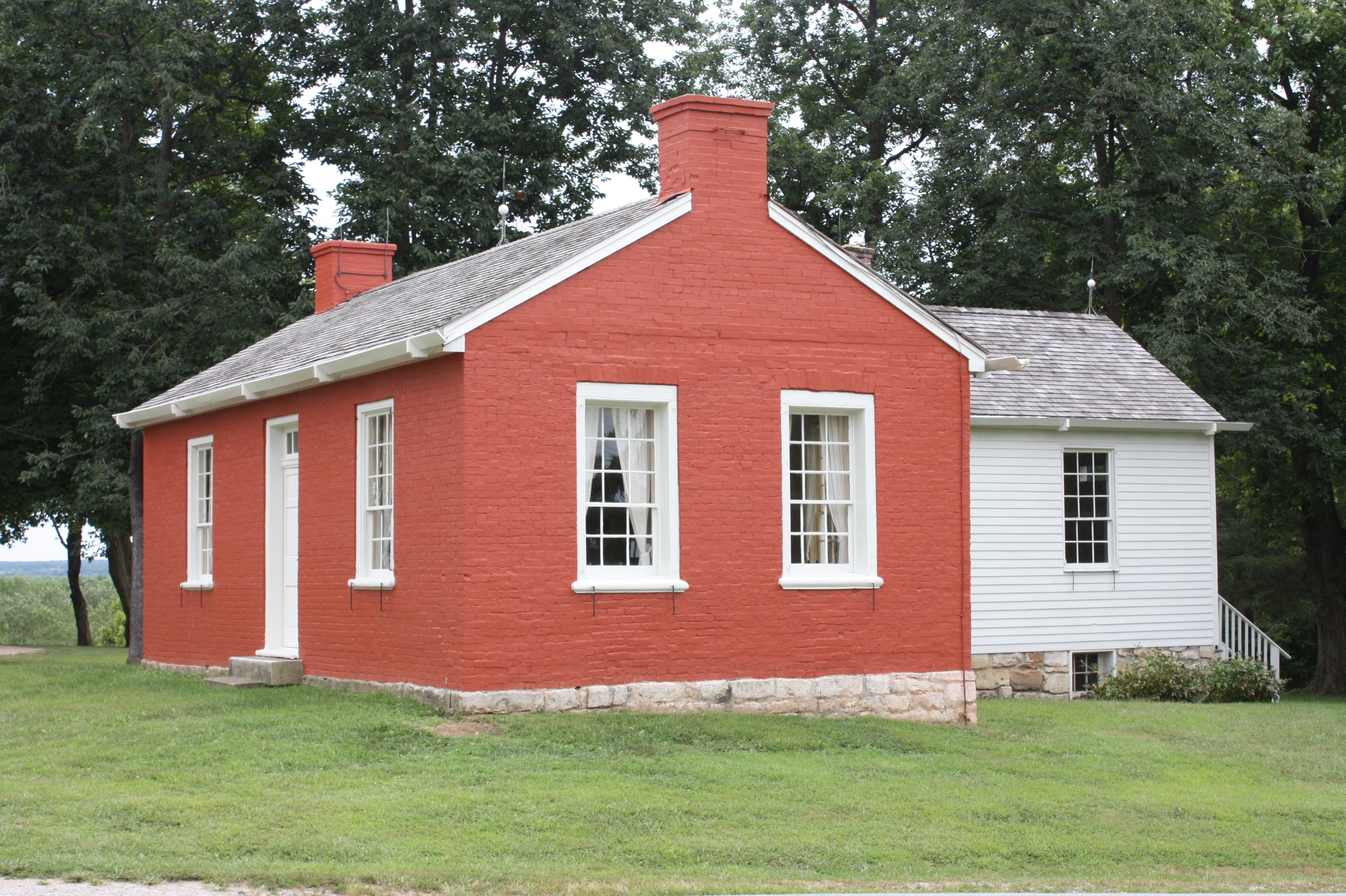 Three governors of Missouri were closely associated with the Arrow Rock community: Claiborne F. Jackson (1860-1862), Meredith M. Marmaduke (1844), and his son John Sappington Marmaduke (1884-1887). Jackson and J. S. Marmaduke also were both important Civil War figures. Dr. John Sappington, a pioneer in the use of quinine to combat malaria, and George Caleb Bingham, Missouri's preeminent artist of the 1800s, also called Arrow Rock home. Many other residents of Arrow Rock and vicinity became prominent in state and national affairs.

By the middle of the 19th century, Arrow Rock had grown to a small city of more than 1,000 residents and was described as one of the busiest river ports between Kansas City and St. Louis. Following the Civil War, river traffic ebbed, and railroads and highways followed other corridors through central Missouri. Today, only some 50 people are full-time residents, but the streets fill with visitors who come to enjoy the hospitality of this charming bit of old Missouri.

The entire town of Arrow Rock was designated a National Historic Landmark in 1964. A portion of the town is also preserved as Arrow Rock State Historic Site. The creation of the state historic site resulted from the National Old Trails Road Association's, and later, the Daughters of the American Revolution's efforts to preserve the “Old Tavern.” In it, in 1912, a room was set aside for exhibits "as a means of teaching Missouri history to the passerby." Now, Missouri State Parks operates the historic site, which features several historic buildings and a modern visitor center. The visitor center contains artifacts and exhibits that portray the history of the town and the Boone's Lick Country.

A landmark of hospitality for over a century, the J. Huston Tavern was begun by Joseph Huston in 1834. As the owners changed, the tavern went through a progression of names such as the Neill House, Arrow Rock Hotel, Scripture House, City Hotel and finally the Old Tavern. A tour of the handsome federal-style brick building reveals its evolution from a simple four-room structure into the more elaborate tavern we see today. The J. Huston Tavern continues to offer an interesting and unique dining experience in a period setting.

The home of 19th-century artist George Caleb Bingham is managed by the state historic site and received its own designation as a National Historic Landmark in 1966. Other buildings operated by the historic site include the old courthouse, the Academy Boarding House, the Dr. Mathew Hall House and a stone jail known as “the calaboose.”

The Friends of Arrow Rock, founded in 1959, own a number of historic structures in town and cooperate with Missouri State Parks to present guided tram tours of the village. Several special events held throughout the year showcase the history of the town.

The town also offers many antique and gift shops, bed and breakfasts, several restaurants in addition to the J. Huston Tavern and the renowned Arrow Rock Lyceum Theater, which presents professional repertory productions in the summer and fall. The historic site features a modern campground for a good night's sleep after a day of touring the historic site and town.