Step back in time to Arrow Rock’s frontier heyday when you dine at the J. Huston Tavern at Arrow Rock State Historic Site. Joseph Huston, Sr., an early Arrow Rock settler and civic leader from Virginia, built the tavern in 1834. Built as a four-room, two-story brick structure with a summer kitchen, it was originally the Huston family home. Thousands of immigrants heading west passed by the tavern and Huston began offering lodging and meals to travelers and local citizens. 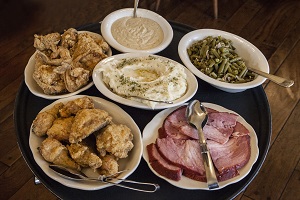 By the mid-19th century, a mercantile store and ballroom had been added, followed by a large dining room and modern kitchen in 1955. Visitors today can enjoy a drink in the mercantile store, otherwise known as the Tap Room and dine in one of three dining rooms: The Sappington Parlor, the Huston Room and the Bingham Room.

The tavern is the oldest continuously serving restaurant west of the Mississippi River, with more than 180 years of continuous service to the public. It is the centerpiece of Arrow Rock State Historic Site and is listed in the National Register of Historic Places.

The tavern began a new chapter in 2019 when the Friends of Arrow Rock took over the operation. For more information about the facility, visit their website or Facebook page, or call 660-837-3200. 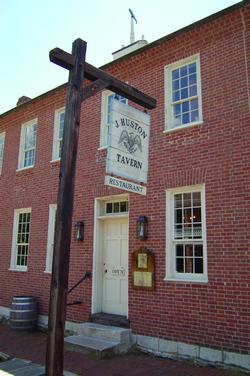