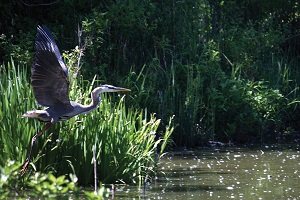 The lake and the wetland at Big Lake State Park offer abundant shelter for a variety of wildlife. The park and adjacent land are home to many animal species including more than 30 species of mammals and almost 40 species of amphibians and reptiles, including false map turtles and Midland smooth soft-shelled turtles. Growing along the banks of the lake are riverine plants such as peach-leaved willow, black willow, bulrush and rose mallow.

A large wetland area is located adjacent to the lake. Wetlands, one of the world’s most productive environments, are becoming increasingly scarce. At almost 300 acres, Big Lake State Park’s wetland is one of the last remaining large marsh communities in northwest Missouri.

The park and the nearby Loess Bluffs National Wildlife Refuge become center stage for a spectacular show of waterfowl using the Mississippi and Central flyways. Each spring and fall, during the seasonal migration between northern breeding grounds and southern wintering areas, thousands of waterfowl stop to rest and feed in the park’s lake and marsh. Visitors are often treated to impressive bird shows as pintails, teals, mallards, snow geese, cormorants and American white pelicans migrate through the wetland. Bird watchers also come to watch wintering bald eagles search for food in the lake. The marsh, with its lush aquatic vegetation, provides an ideal refuge for a variety of wetland bird species such as great blue herons, yellow-headed blackbirds, bitterns, soras and rails.

In late fall, the park participates in Loess Bluffs' Eagle Days and is included in the event’s auto tour route. Park staff set up spotting scopes to make it easier to see in the cottonwood trees where more than 80 eagles can often be seen. An added bonus is the snow geese, which can number over 500,000 and cover the park’s lake in a blanket of white.

Located near Big Lake State Park, Loess Bluffs National Wildlife Refuge was established as a refuge for feeding and a breeding ground for migratory birds and other wildlife. The refuge includes 7,415 acres of wetlands, grasslands and forests along the eastern edge of the Missouri River flood plain. It offers excellent wildlife viewing from its 12.5-mile auto tour road, nature trails and viewing platforms.