The Missouri State Park Rangers have been recognized nationally as being one of the leading agencies providing law enforcement services in a recreational setting. The program’s success is grounded in strong management support, necessary legal authority to enforce state laws and park rules and regulations, and adequate funding for personnel and equipment.

By 1967, the Missouri state park system had 45 parks and historic sites. With the rising number of people visiting the parks daily and camping overnight, the need for law enforcement was becoming clear.

The Missouri State Park Rangers were created in 1967 to meet this need for law enforcement within state parks and historic sites. The Park Rangers began with 10 commissioned officers, including four seasonal rangers, for the 1968 season.

In the beginning, rangers had to provide their own weapons and were required to keep them locked in their vehicles during daylight hours; they could wear them at night. The department provided uniforms and a flashlight. Most of the patrol vehicles were eight to 10 years old and had more than 150,000 miles. Rangers used their own citizens band radios to communicate with local law enforcement agencies. Rangers did not receive any formal academy training in the early days.

In 1982, rangers were given the powers of search and seizure and jurisdiction on all state highways and county roads passing through state parks and historic sites. The ninth full-time ranger was hired in 1982. Annual in-service training in firearms, first aid, CPR, criminal law, arrest procedures and report writing also began in 1982. The training was held at Bennett Spring State Park near Lebanon, where a firing range was built and a classroom was located in the dining lodge.

In 1984, rangers were issued Smith and Wesson Model 19, .357 caliber revolvers. This handgun replaced the old Model 15, .38 specials, and a few Model 10s issued to some rangers. The Ranger Program was reorganized in 1986 with the state being divided into three regions: Region I, the area north of Interstate 70; Region II, the area east of Highway 63 and south of I-70; and Region III, including the area west of Highway 63 and south of I-70. A captain, who was assisted by zone sergeants, commanded each region.

The 18th full-time ranger was hired in 1988. This same year, 26 seasonal rangers were also employed from four to nine months. All full-time rangers began attending an additional 120 hours of law enforcement academy training during this year. In 1989, rangers were issued body armor and shotguns for the first time.

In 1992, the Ranger Program transitioned to the Glock semi-automatic pistol. Rangers were trained with and issued oleoresin capsicum pepper spray. In the same year, the Ranger Program purchased three mountain bikes to use for patrol. Currently, nearly 100% of the Ranger Program’s staff are certified police bicycle officers and use the bicycles as a tool to provide community-oriented policing.

The assistant chief park ranger position was created in 1995. This position holds the rank of major. After nearly 30 years of driving midsize vehicles, the rangers began driving full-size police type vehicles. In 1995, the program also began converting the classified part-time rangers to full-time status. In the same year, the ranger uniform was redesigned. The shirts, hats, badges, coats and patches were all changed.

In 1997 the ranger fleet began converting to all four-wheel drive police type vehicles. New door decals and reflective stripes were added to the vehicles to make them easier to recognize as Missouri State Park Ranger vehicles. Rangers also made a transition from the PR-24 side handle baton to the Pressure Point and Control Tactics (PPCT) collapsible baton. The original Glock handguns were replaced with an upgraded model. These pistols were the first to be engraved with “Missouri State Park Rangers” on the slide.

Over the years, the Missouri State Park Rangers have participated in several historically significant events. Rangers provided security at Times Beach in 1982 when the community was closed due to dioxin contamination. Rangers have also participated in three of the largest manhunts in Missouri history. The first manhunt was centered around Rolla in 1986. The second was around California in 1992 and the last time was around Truman Lake in 1997. Rangers were involved in the cleanup oversight of the Gasconade River oil spill in 1990. Rangers provided around-the-clock safety and enforcement duties during the floods of 1993 and 1995. And finally, rangers began assisting with the inaugural security for the governor in 1996.

In 2001, following the terrorist attacks on Sept. 11, Missouri State Park Rangers were requested to assist with security of state office buildings and the state Capitol. Rangers were called into service again in 2002 and 2003.

In 2002, the Ranger Program replaced their Glock pistols with new generation Glock pistols. The Park Watch Program was started in 2002 with a goal of increasing contact with the public to provide information about safety and decrease theft and injury.

In the summer of 2003, the Ranger Program introduced a new more practical uniform for everyday use. The new uniform consisted of a black baseball-style cap, green six-pocket cargo pants and a less formal tan uniform shirt. The Ranger Program retained the traditional uniform consisting of the green campaign style hat, green trousers, tan uniform shirt for use during formal events. Rangers were trained in the use of tactical folding knives and given the opportunity to have an additional tool for defense.

On Dec.14, 2005, the Taum Sauk Reservoir, located on Proffit Mountain in Reynolds County, failed. More than 1.3 billion gallons of water traveled down the mountain into the East Fork of the Black River and Johnson's Shut-Ins State Park, wiping out park buildings and the campground. Rangers were deployed for search and rescue and the subsequent 24-hour security of the closed park.

In November 2006, the Ranger Program reorganized its three regions into two larger regions, with a captain commanding each region. The new regions divide the state into two equal units, one encompassing the northern half of the state and the other the southern half of the state. Each region is subdivided into an eastern and western zone, with sergeants assigned to work as field supervisors. Each zone also has two corporals who provide law enforcement services to a specific park, as well as assisting the sergeant with special duties. Though the structure of the Ranger Program has changed, its dedication to serving the public and protecting Missouri’s cultural and natural resources remains strong.

In 2007, the Missouri State Park Ranger Program celebrated 40 years of providing service to the public and state park system.

In 2009, the Ranger Program acquired patrol rifles from the Office of Administration and began issuing them to field staff after receiving training.

In 2012, the Ranger Program adopted a patrol area strategy as a way to multiply its efforts and provide more law enforcement services to a greater number of state parks and historic sites. Every ranger is currently assigned a number of facilities in an area or cluster to provide proactive patrol and law enforcement services in a concerted effort to enhance overall safety and security system-wide. Patrol frequency is determined for each facility in consultation with facility managers and district supervisors. This is a shift from the traditional one park/one ranger approach, and promises to be an effective and efficient way of multiplying existing resources. In 2012, the Park Ranger Program also began providing the nationally acclaimed “Hug-A-Tree and Survive” program, “Situational Awareness” training, and other outreach programs aimed at children, the public and staff in an effort to help make Missouri’s state parks and historic sites more safe and secure.

In early 2018, the Ranger Program became the first Missouri state law enforcement agency to transition to 9mm service pistols, with the adoption of the Glock 17 Gen 5 handgun.

In the summer of 2019, the Ranger Program adopted the TASER X2 Conducted Energy Weapon for all sworn personnel.

In 2022, the Ranger Program is composed of one clerical support member and 47 officers organized into a paramilitary rank structure. The program consists of the following positions:

The honored tradition of dedication to duty, providing professional law enforcement service and commitment to the safety of all visitors to our facilities is carried on by today's generation of park rangers. Our motto, "Service, Safety and Enforcement," provides the guiding principle in the role of supporting the mission of the Missouri state park system. Throughout the years since, the Missouri State Park Rangers have established a proud tradition of devotion and commitment to service in performing their duties in a professional and competent manner. Missouri State Park Rangers will continue to be a proud institution providing service, safety and security to the visitors of the Missouri state parks now and into the future. 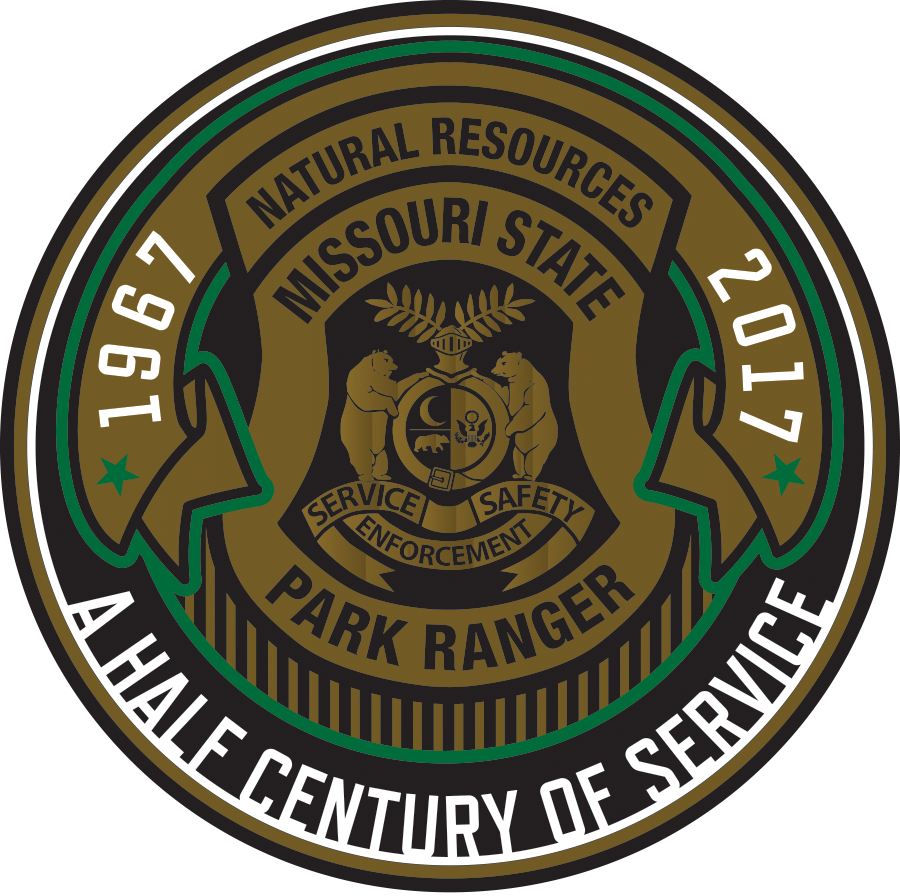