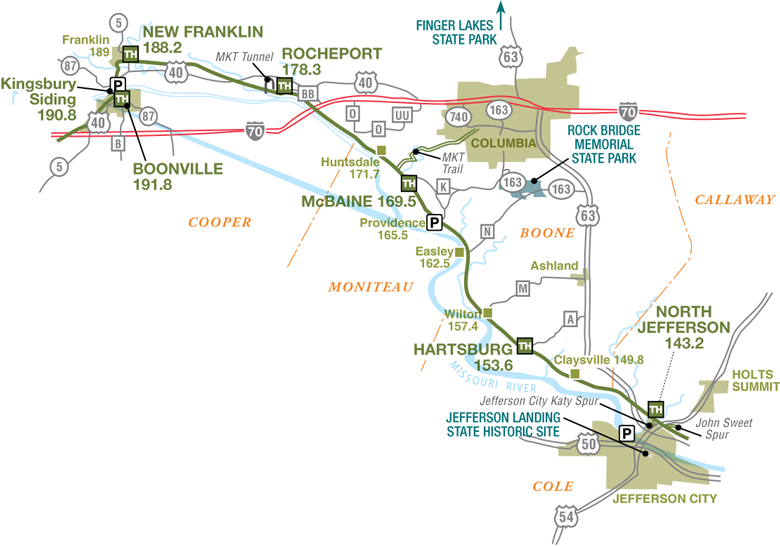 From Boonville eastward, Katy Trail State Park closely parallels the route of the Missouri River. This provides for many scenic stretches with towering bluffs on one side and the river on the other.

Boonville represents a town that made the transition from being a major river port to a booming railroad town. Many remnants of this era can still be seen in Boonville, including the MKT depot. The depot has been restored by the Department of Natural Resources and serves as the headquarters for the Boonville Chamber of Commerce.

Just north of the Missouri River is the town of New Franklin and the site of the historic town of Franklin. Franklin, before being washed away by the river, was associated with the beginning of the Santa Fe Trail.

This section includes the town of Rocheport, which has many houses that date from before the Civil War. The only tunnel on the MKT line was built at Rocheport around 1893, and trail users today can pass through this 243-foot-long stone-arched tunnel.

Near Rocheport, the spectacular bluffs and the rock drawings or pictographs left by native Americans were mentioned in the journals of Lewis and Clark as they traveled up the Missouri River. A rare surviving pictograph can be seen above Lewis and Clark Cave on the trail. Entry into the cave is not permitted.

Between Rocheport and Jefferson City, the trail follows the river as hikers and bicyclists have the opportunity to visit the towns of Hartsburg, Easley and McBaine.