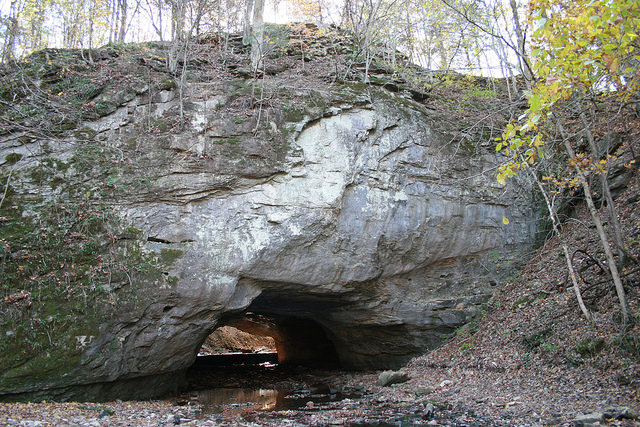 Visitors in the park will notice many sinkholes, caves, underground streams and small springs, all characteristic of a topography known as "karst." The park’s most prominent karst feature, the Rock Bridge, was separated from the rest of the cave system when a portion of the cave roof collapsed. Devil’s Icebox Boardwalk leads visitors over the 125-foot-long natural tunnel, to Devil’s Icebox, by a sinkhole, past Devil's Icebox Spring and back. The Devil’s Icebox is a double sinkhole that offers a view of the underground stream and cool, refreshing air, which explains the name. Connor’s Cave, downstream, can be explored on your own. Devil’s Icebox Cave, upstream, is closed to protect the bats.

Devil’s Icebox Cave has a total mapped passage distance of 6.5 miles. Over the years, these spacious cave passages have become the home to especially adapted animals. Endangered gray bats use the cave as a summer roosting site to give birth to and raise their young. Each gray bat eats several hundred insects each night above ground and then deposits guano in the cave during the day and so plays an important role in two ecosystems. The cave is the only known habitat for the pink planarian, a species of flatworm. The cave’s watershed of 8,500 acres contains thousands of sinkholes as well as losing streams, which allow water to drain down cracks in the limestone rock and flow into the cave. The water’s quality affects the pink planarian and other cave animals.

The stream that exits Devil’s Icebox Cave and flows through the Rock Bridge was a source of power for settlers in the 1800s. A stone dam was built at the Rock Bridge to help harness the water’s power to operate a gristmill. The first paper mill west of the Mississippi River was established at the site in 1834, followed by a whiskey distillery in 1847. A blacksmith shop, a store, several homes and roads completed the once-thriving community of Rockbridge Mills, later named Pierpont (French for "rock bridge").

Although privately owned, the area was semi-public for more than a century. The Rock Bridge, with its natural wonders and cool air, became a gathering place for the country folk in the surrounding vicinity. Plays, political rallies, dances and family gatherings attracted people to the area. In 1961, tragedy struck a Columbia family resulting in a community movement to preserve the area permanently for public use. Nine-year-old Carol Stoerker, daughter of a University of Missouri professor, was struck by a car and killed. In her memory, her father wanted to establish a park where children could run and play in safety. In 1967, the area was established as a state park.

Today, visitors can explore the natural wonders of the park along hiking and bicycling trails. Streams, bordered by bottomland forests and surrounded by forested hills, flow through the park. Gans Creek Wild Area features Gans Creek, surrounded by high bluffs with small glade openings, rare plants and moist shaded hillsides. This area can be explored on foot or horse. Grassland and Karst trails wind through restored native grasslands and past scattered sinkholes, some of which are dry and wooded and others of which are natural ponds or marshes.

Visitors, using only a map and a compass, can find their way through these wooded areas using the park’s orienteering course. Park staff lead tours of Devil’s Icebox Trail and Connor’s Cave for groups who make arrangements in advance. Summer bat emergence programs and other programs are offered to the public.

Picnic sites, scattered throughout the park, offer a quiet place to enjoy lunch or rest after a day of hiking. Two reservable picnic shelters and playground equipment make the park a great place for family gatherings. Primitive camping for nonprofit organizations such as Scout, youth and educational groups is available by making advanced reservations.