A Dominant and Respected Tribe 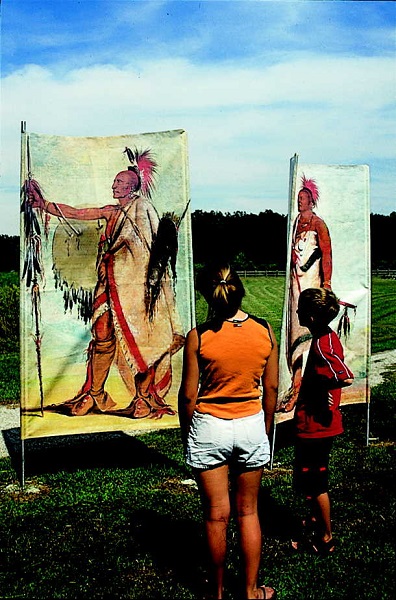 Explorers Louis Joliet and Father Jacques Marquette first noted the existence of the Osage American Indians in the Mississippi Valley in 1673. In 1719, Charles Claude du Tisne, on his way to negotiate peace with the Pawnee, spotted a village of Osage on a hill near the Osage River, the location that is now preserved as Osage Village State Historic Site.

Just prior to du Tisne’s visit, the Osage tribe that occupied the site had split into two groups, the Little Osage and Big Osage. The Little Osage moved north to Saline County. The Big Osage tribe remained at the site between 1715 and 1775 and became a dominant force in fur trade.

The origin of the Osage Nation is somewhat uncertain. Two theories have been discussed in the past. Some historians suggest that they split from southern groups like the Mound-builders, while others place them as splitting from a northern tribe descending from the Siouan line. Whatever lineage given them, the Osage came into a separate identity sometime in the late 17th century.

The overall territory that the Osage tribe would come to claim was vast. It included what is now southern Missouri, Arkansas, eastern Kansas and Oklahoma, with principal villages located in western Missouri where the streams known today as the Marmaton, Little Osage and Marais des Cynges come together to form the Osage River in Vernon and Bates counties.

At its height, the village that once existed on the location of Osage Village State Historic Site contained between 2,000 and 3,000 people and about 200 lodges. The everyday hustle and bustle of life in the village included the planting of gardens of corn, squash and beans, and hunting for bison, bear, elk and deer. The people gathered fruit and fished in the nearby rivers and oxbow lakes. They spoke a language classed as one of the southern Siouan tongues related to the Quapaw of northeast Arkansas.

When the first French traders came into contact with the Osage, they came not to conquer but to trade with them. From the late 18th century to the early 19th century, the Osage accounted for over half of the total trade in furs on the Missouri River.

In 1804, the United States government took control of the Louisiana Purchase territory previously held by the French and Spanish. Unlike the French, American settlers demanded protection from the Osage, the daring adventurers who were skilled in the use of horses and guns. In 1808 and 1825, the Osage signed treaties with the Americans, giving up all of present-day Missouri and parts of Arkansas, Kansas and Oklahoma. In 1872, they traded their remaining Kansas lands for the present reservation in Oklahoma.

In 1941, an archaeologist from the University of Missouri, Carl Chapman, Ph.D., surveyed the site and confirmed that the current location of Osage Village State Historic Site, then owned by Leslie Brown, was a principal village site of the Osage. Through excavations over the years, archaeologists have learned that the houses were rectangular - 30 feet to 50 feet long and about 15 feet to 20 feet wide, with doorways that faced east. Pottery, weapons and tools that were discovered provide information about the daily lives of the villagers. In 1971, the site was listed in the National Register of Historic Places.

Brown knew the value of the property and was interested in seeing the site preserved. After the death of the Browns, the Archaeological Conservancy purchased the property in 1981, and in 1984 sold the land to the state’s Department of Natural Resources to preserve as a state historic site.

Today, a walking trail and outdoor exhibits help visitors to imagine the daily activities at this once-thriving American Indian village. Various interpretive stops along the trail allow visitors to visualize the relationship of this site to other nearby Osage and early European sites that once existed on distant hillsides.