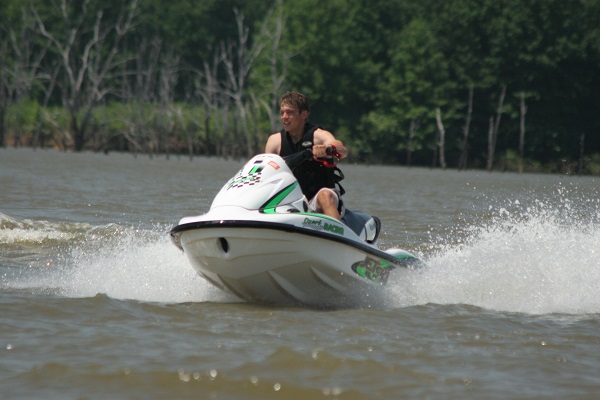 Nestled in the rolling farmland of northern Missouri is Long Branch Lake. Three separate areas with shoreline have been designated as Long Branch State Park, providing public access to the lake and remaining natural features of the area.

The park's landscape was created millions of years ago when sheets of ice moved over the land. When the glaciers receded, they left a thick mantle of rich soil and a gently rolling landscape. As the Missouri River and its tributaries began to carve into the land, a more rugged topography was formed. Prairies dominated the upland areas of northern Missouri, while forests formed in the valleys of the rivers and streams.

In the 1830s, settlers began moving into the area, building their homes near these streams and rivers. The streams provided them with a source of power. Water mills were used to saw lumber, sharpen tools and grind corn into meal.

Settlers were also attracted to the woodlands in the area, as they were well populated with hollow trees that provided a home for the American honeybee. A trail through the woods became known as the Bee Trace. Settlers chopped the trees to retrieve the honey, destroying the tree and often its colony of bees. Today, bee trees are scarce but portions of the Bee Trace area are preserved in the park.

Although much of the land in northern Missouri has been converted to cropland, remnants of the original plants and animals are preserved at Long Branch State Park. Woodlands of post oak, black oak and shagbark hickory can be found along the flat ridgetops, while the slopes and creek bottoms support white oak, bur oak, sycamore and silver maple. Wildlife in the forest-prairie region include white-tailed deer, wild turkey, bobwhite quail, red-tailed hawk, raccoon, red fox and more.

Where these forests blend into the prairie areas, native prairie plants flourish. More than half of northern Missouri once was covered with native prairie. Today, a 160-acre remnant of native prairie encourages the restoration of prairie grasses and plants such as little bluestem, big blue-stem, Indian grass, wild indigo and sensitive brier. A park trail winds through this prairie, giving visitors a closer glimpse.

In 1979, a dam was built on the Little Chariton River by the U.S. Army Corps of Engineers to control flooding and create lake recreation. Just as the streams and rivers influenced the settlement to the area, the river and Long Branch Lake continue to be a gathering point for the people in north Missouri to enjoy.

Long Branch State Park provides visitors with easy access to the lake with boat ramps in all three areas of the park. The lake has an excellent reputation for bass fishing, but anglers can cast their lines for catfish, walleye and crappie as well. The lake's 24 miles of shoreline have many small coves that offer good fishing. A partially covered accessible fishing dock is also available. A sand beach near the campground, complete with volleyball net, provides swimmers access to the lake and fun in the sun.

Visitors wanting to play more than a day can choose from basic or electric campsites located in a wooded area bordering the native prairie area and the lake. Nine of the basic campsites are secluded walk-in sites close to the lake. The campground features modern restrooms with hot showers.

Picnic sites, scattered under trees and along the lake, offer a quiet spot for lunch and a scenic view. Two group shelters are perfect for family gatherings and can be reserved by contacting the park office. Near one of the shelters is a 1-mile trail that leads to the lake where benches await, providing a great spot to sit and watch the day go by.