Bennett Spring and its valley have attracted visitors since the mid-19th century. Settlers found the spring-fed streams to be ideal locations for their grist and flour mills, and the wilderness around the stream was perfect for hunting. James Brice was one of the first settlers in the area and he built his first mill in 1846. Although several other mills were built at different times, the most successful mill was operated by Peter Bennett, Brice’s son-in-law. Bennett became the namesake for the spring, and the spring valley became a popular hunting and camping ground for farmers waiting for their grain to be ground at the mill.

Already a favorite among fishermen, the area became even more popular in 1900 when the Missouri Fish Commissioner introduced 40,000 mountain trout into the spring-fed stream. In 1924-1925, the state purchased the spring and part of the surrounding area to create one of the first state parks. In the 1930s, the Civilian Conservation Corps contributed much of the present-day character of the park, building cabins, a shelter house, roads, trails, the arched bridge across the spring branch and the rustic dining lodge. 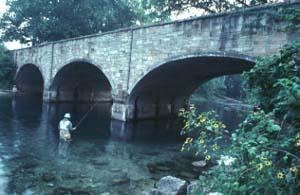