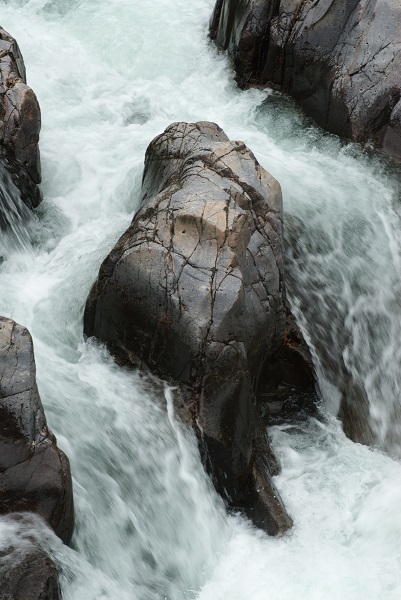 The rugged terrain of the St. Francois Mountains and Johnson’s Shut-Ins State Park is home to many natural landscapes like woodlands, glades and rivers. The park itself has 17 different natural terrestrial communities and supports more than 850 plant species, 40% of the plant species of Missouri.

The Johnson’s Shut-Ins Fen Natural Area protects a small but environmentally critical Ozark fen – a wetland fed by groundwater rather than rainfall or surface streams. This sensitive wetland supports species such as arrowhead, queen of the prairie, wild sweet William, four-toed salamander and devil crayfish. Located in the flood plain of the East Fork of the Black River, the fen was heavily damaged by the reservoir breach. It is uncertain to what extent it might recover. An interpretive pavilion provides information about this unique resource.

Part of the park is included in the 7,028-acre St. Francois Mountains Natural Area, which is the state’s largest natural area and designated in recognition of its outstanding natural and geologic features.

The 18-acre Johnson’s Shut-Ins Dolomite Glade Natural Area is home to a different array of plants and animals. This sedimentary glade is a rare occurrence in the igneous St. Francois Mountains.

The signature feature of the park is the shut-ins with its spectacular chutes and waterfalls confined within the canyonlike gorges of the East Fork of the Black River. It is one of Missouri’s most outstanding examples of a shut-in and is the principal feature of the 180-acre Johnson’s Shut-Ins Natural Area. A walkway leads to an observation deck overlooking the scenic pothole shut-ins and gives great views of the shut-ins and valley.