From corporate retreat to public refuge

For thousands of years, the rugged but breathtaking landscape of the Current River hills drew settlers to the area. For many years, settlers made their living by working in the nearby iron mine or harvesting timber for use in the production of railroad ties, barrels, pallets, charcoal briquettes and lumber.

In the late 1930s, a major development occurred along the banks of the Current River. The Alton Box Board Co., a boxboard and paper manufacturing company from Alton, Illinois, began construction of its corporate retreat. The company used the complex as its retreat for their executives, their families and important customers until 1996. The buildings reflect the rustic architectural style of buildings made popular by the National Park Service in the early part of the 20th century. Blending harmoniously with their surroundings, the buildings were composed of local material, which was used for the rubble stone foundations and weatherboard siding. Sprawling over the site’s 1,565 acres, the Alton Club included man-made lakes, a lodge, barracks for both men and women, gymnasium, pool hall and other recreational 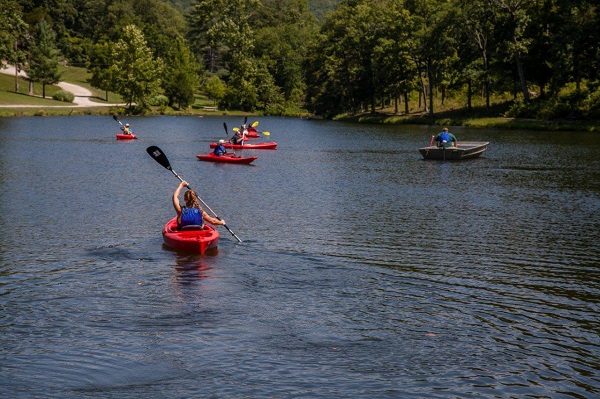 The unique complex of buildings left from the original Alton Club is historically significant regionally as one of only a few remaining intact examples of the private corporate and sportsmen’s retreats once found along the banks of the Current and Jacks Fork rivers. The historical significance of the buildings and their associated cultural landscape resulted in approximately 35 acres, including 21 individual structures, being listed in the National Register of Historic Places.

Another significant chapter in the history of the area occurred in 1964 with the creation of the Ozark National Scenic Riverways, the first national park designated to protect a wild river system. The ONSR includes significant portions of both the Current and Jacks Fork rivers and their many tributaries. Current River State Park is located along Current River and a portion of the park is within the scenic easement of the Ozark National Scenic Riverways.