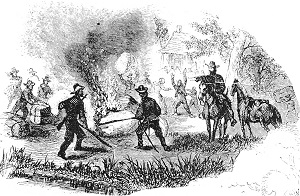 In 1862, the Missouri-Kansas border was the scene of frequent raids and skirmishes between pro-Confederate guerrillas and Union forces. In August 1862, U.S. Senator and notorious Kansas jayhawker Jim Lane began recruiting Black soldiers to join his Kansas forces before other federal efforts.

Many of the Black soldiers were escaped slaves who had fled to Kansas from farms and towns in Missouri and Arkansas to find freedom. Some were “stolen” in raids led by Lane or other jayhawk leaders during the border wars between Kansas and Missouri. Others were freedmen of color who had moved to Kansas to find a better life. These men formed the 1st Kansas Colored Volunteer Infantry in August 1862, and it quickly grew to 500 soldiers, uniformed, trained and ready for action.

African American soldiers often faced opposition from many white Americans who felt Blacks could not be as skilled or brave as white soldiers. Many felt Blacks would not be able to handle battle and were better suited for other roles such as cooks, aids and laborers.

By the fall of 1862, the area around Bates County, Missouri, had become a haven for guerrillas and Confederate recruiters. One of the areas often used by the guerrillas was Hog Island on the Marias-des-Cygnes River. From here, the guerrillas terrorized pro-Union families and led raids into eastern Kansas.

In October 1862, 240 soldiers and 12 officers of the 1st Kansas Colored Volunteer Infantry marched into Bates County to clear out the guerrillas. Using the Fort Scott Road, the troops traveled from their camp at Fort Lincoln, Kansas, and arrived in Bates County on Oct. 27, 1862. Upon arrival, they commandeered the home of local Southern sympathizers Enoch and Christiana Toothman as their headquarters. The troops camped in the yard, used the rails of the fence to build breastworks, and rechristened the farmstead “Fort Africa.”

During the next two days, the Black soldiers skirmished with local guerrillas. On Oct. 29, a detachment of about 30 Black troops engaged the bushwhackers as a diversion while a foraging party searched for salt and cornmeal. Once the troops returned to the camp, the rebels set fire to the tallgrass prairie, forcing the Kansas troops to set a backfire to prevent flames from reaching Fort Africa. Using the smoke as cover, the rebels fired at the troops then withdrew, hoping the Kansas troops would pursue them.

A party of eight Black soldiers went to locate the rebel position. Venturing farther from camp than ordered, the troops traveled out of sight behind a low hill known as Island Mound. A party of about 20 men sent to locate the first squad joined them and moved farther away from camp. The rebels had successfully lured the Kansas troops into a trap.

About 130 rebel horsemen emerged from the woods bordering the Marias-des-Cygnes River, forcing the Black detachment to retreat toward Island Mound. The rebel horsemen caught them before they could reach shelter in a ravine and the battle began. On the southern slope of Island Mound, with the prairie on fire all around them, the two groups engaged in hand-to-hand battle. The rebel horsemen carried shotguns, pistols and sabers and outnumbered the Black troops 6 to 1. The Black soldiers fought back fiercely, using their bayonets and rifle butts.

When reinforcements arrived from Fort Africa, the rebel horsemen retreated over the top of Island Mound. At the end of the battle, the Kansas regiment had eight soldiers killed and 11 wounded. Southern losses were probably similar. The day after the battle, Union reinforcements arrived and descended on Hog Island. They found that the rebels had pulled out, leaving supplies and livestock behind.

News about the battle spread throughout the country. The reports were notable not only because it was the first time Black soldiers engaged in combat during the Civil War but also because of the way they fought. Praise came from both sides of the battle. White officers praised the Black troops with Lt. R. Hinton telling the Daily Conservative of Leavenworth, Kansas, that the Island Mound campaign “proved that negroes are splendid soldiers.” Even Southerners praised the Black troops with rebel Bill Turman of Butler being quoted in The New York Times that the Black soldiers "fought like tigers.”

The bravery demonstrated during the battle refuted claims that Black soldiers lacked the courage or ability to engage in combat. It also paved the way for additional African American regiments. By the end of the Civil War, about 180,000 Black men served in the U.S. Army and almost 18,000 served in the Navy.

On Jan. 13, 1863, less than two weeks after the Emancipation Proclamation took effect, the 1st Kansas Colored Volunteer Infantry became the fifth African American regiment mustered into Federal service – three months after they won their first battle. Throughout the war, the infantry regiment saw extensive action, fighting in 16 battles and numerous skirmishes. They mustered out of service on Oct. 1, 1865.