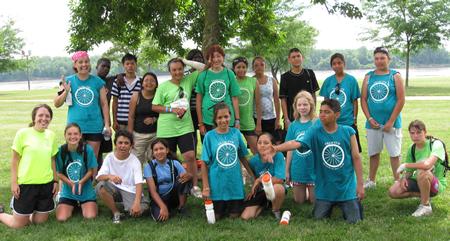 Record temperatures for June 21 through the 26 didn’t stop 21 eighth grade students from riding across Missouri on this year’s Katy Trail ride.  Beginning in Clinton, they traveled a total of 240 miles on Katy Trail State Park, ending in St. Charles, riding amongst cyclists of all skill levels.

The students from Scuola Vita Nuova in Kansas City, along with their teacher and a parent, had been preparing and training for the week long ride since November 2008, spending evenings and weekend mornings riding in Kansas City to build endurance, learn bike safety, and bike repair.  The ride was a first time experience for them.  Some learned to ride a bike for the first time.  Not only did they participate on the ride each day, but they also learned how to camp, setting up their campsite every evening and taking it down each morning.  In addition, all the students took turns volunteering with the ride staff.  Many had never been so far from their homes or seen these parts of Missouri.

Sixty-one miles the first day and 64 the second, the students discovered what the long awaited trip would be like: a big challenge.  When asked what their first reactions were, they immediately replied about the smothering heat, temperatures in the upper 90s.  That, most said, was the biggest and most unexpected challenge of the ride.  However, the group also dealt with flat tires, mosquitoes, sunburn, and adapting to riding the narrow trail in a large group with the other trail riders.  Staying properly hydrated was also difficult, even with fresh supply stops throughout the day.

Although the reality of the ride was not quite what they expected, everyone set out each morning determined to ride as long and as hard as they could, often pushing themselves beyond what they thought they could endure.  To get to the camp site in Hermann, a 38-mile day, the group had to travel along a busy highway the last stretch of the ride.   Despite all of the unexpected difficulties, the students supported one another, encouraging everyone to keep going.  They hung in there, even when many of the other adult riders could not complete the day’s ride.

As they rode through St. Charles after 27 miles to their last stop, finished riders watched and cheered; many had been talking to the students and encouraging them all week, amazed at what they were accomplishing.  Every student that rode finished the whole ride that day.

By the end, the trip was not only a success, but also a lifetime experience.  Arriving in Clinton with little idea of what the week would be like, these 13-year-old kids discovered that they can do much more than they imagined they were able.  They biked their way across their state, provided their own shelter each night, and always had the courage to get up and do it all over again.