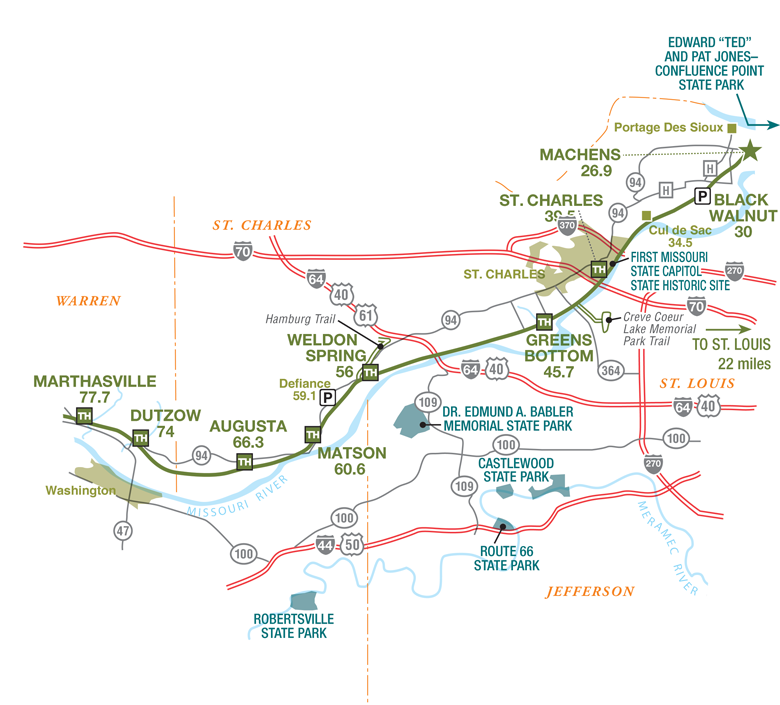 This section contains the heart of an area known as "Missouri’s Rhineland" because of the number of Germans who flocked to this part of the state in the mid 1800s. The town of Augusta, first settled in 1836 on the bluffs overlooking the river, soon became the center of German cultural traditions. The Germans established vineyards, and many wineries still thrive today.

The shadow of the railroad still exists in the town of Defiance, which earned its name by building a depot in 1894 to lure the railroad stop away from the neighboring town of Augusta. The ornate stamped metal fronts on store buildings in Marthasville and Dutzow reflect the industrial age, introduced to these towns by the coming of the railroad.

St. Charles is one of the most historic towns along the route. An early town of French settlement dating back to the mid 1700s, the town was also the state’s first capital before it was moved to Jefferson City. The first Capitol is today part of First Missouri State Capitol State Historic Site, operated by the Department of Natural Resources.

This is a very scenic area with limestone bluffs bordering the trail through the Weldon Spring Wildlife Area, managed by the Department of Conservation. As riders and hikers approach Augusta from the east, more bluffs appear, this time composed of dolomite and sandstone. The Klondike Quarry area east of Augusta exhibits a particularly fine exposure of St. Peter sandstone. This white quartz sandstone was ground up at this site for use in manufacturing glass.

The trail now extends to Machens, which is northeast of St. Charles. Machens is the eastern end of Katy Trail State Park. Also known as Texas Junction, Machens was the junction between the MKT and the Chicago, Burlington and Quincy (CB&Q) railroads. The MKT purchased operating rights on the CB&Q so that Katy trains could travel to Union Station in St. Louis. Black Walnut was named for a small grove of black walnut trees and was one of three main stops along the Katy railroad from Machens to St. Charles.