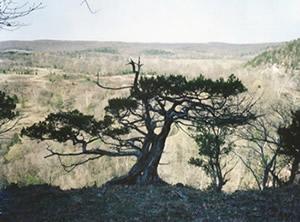 The 206-acre natural area is seven miles from the main body of the park and borders the Meramec River. The area includes state significant dry limestone/dolomite cliff and limestone/dolomite talus, as well as regionally significant chert savanna and dry chert forest. Across the Meramec River from the bluff, but also in the natural area, is a significant great blue heron, Ardea herodias, rookery with 40 active nests. There is an osprey, Pandion haliaetus, which is a summer resident of the immediate vicinity.

The dry limestone/dolomite cliff community, characterized by ancient (300 yrs+) eastern red cedars, Juniperus virginiana, is the principle reason for the natural area designation. With the river below and with fire's natural aversion to moving downhill, especially down sheer cliff faces, the trees in these communities have been protected from fire. Trees in these areas have been found to be between 200 and 500 years old, with 144 cedars over 200 and 70 cedars over 300 years old. Their average age is 334 years. These trees are literally growing out of the bluff face. The surrounding community is rich in diversity and harbors some rare and unusual species.

Growing upon many of these ancient cedars is Flavoparmelia rutidota, a lichen that appears on the Missouri rare and endangered list as status undetermined. This lichen is characteristic of old growth cedars along high quality bluff systems in Missouri and Arkansas, notably in the White River Basin and one other drainage. Otherwise, it has only been found in Texas and Mexico. Vilander Bluff is the northeasternmost location known for Flavoparmelia rutidota. 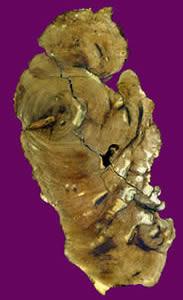 Doug Ladd of The Nature Conservancy has identified this species and 69 others on the bluff, including Punctelia missouriensis, a new species for which Vilander Bluff is the type locality. The lichen diversity of the site is remarkable, representing 16% of all lichen species in Missouri. Several of these are rare or uncommon and indicate the high quality of this site.

The diversity of lichens and the great age of the trees suggest a rich environment, but it is also a very harsh one in which growth occurs very slowly. The cross section of one tree measured a mere nine-and one-third-square inches, yet, it was 500 years old, establishing it as the slowest growing thing to ever have lived in Missouri. Trees in this area are exposed to sun, wind, ice and falling rock. In one 298 year-old specimen, the tree showed 45 rock scars. Thus, this individual tree was struck by falling rock, on average, every seven years.

All of this falling rock has accumulated at the base of the cliffs and supports a limestone/dolomite talus community. Included in the broken rock are fractured pieces of eastern red cedar, and the sparsely vegetated slope does support bladdernut, touch-me-not, wild hydrangea and a variety of ferns where moisture is present.