Down the "Mother Road" 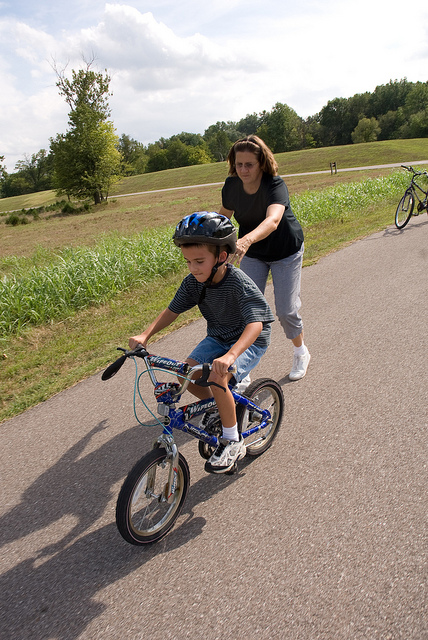 Route 66 State Park showcases the history and mystique of a highway that has been called "The Main Street of America." Located along the historic Route 66 corridor outside of Eureka, this park is a boon to park visitors who want to enjoy nature and take in some interesting displays showcasing Route 66 across Missouri.

Route 66 was designated as a federal highway in 1926 and occupies a special place in American popular culture and history. Spanning some of the most remote country in the United States, from Chicago to Los Angeles, Route 66's fame is primarily due to its role in social changes taking place during the first half of the 20th century. The highway has come to represent American mobility, independence and spirit of adventure. It became one of the greatest migration routes in our country's history and has been labeled by author John Steinbeck as the "Mother Road."

To drive Route 66 during its heyday was to experience both large cities and small towns in rural America. Gas stations were not that plentiful and speed limits very low. Many people have fond memories of childhood vacations along Route 66. A portion of the original Route 66, including a historic bridge across the Meramec River, runs through Route 66 State Park. The bridge is no longer open to vehicle or pedestrian traffic.

A roadhouse along Route 66, built in 1935, serves as the park's visitor center. This roadhouse comes alive with the memories of many travelers who visited it during the Route 66 era and ate at the restaurant, which was known for its marvelous food. Depending on the year of visit, the roadhouse had four different owners. It opened as the Bridgehead Inn in 1935; Steiny's Inn in 1946; Bridgehead Inn in 1972; and the Galley West in 1980.

Route 66 State Park strives to keep some of the memories alive through its displays and memorabilia. The visitor center has a historical display area complete with Route 66 memorabilia. Wandering among the display items, visitors will see the rich architecture of the buildings and towns that graced the roadways of Missouri from the 1930s to the 1960s, and souvenirs that long ago travelers bought on their journey across Missouri on Route 66. A gift shop, specializing in hundreds of Route 66 items, is open seven days a week from March through November in the visitor center.

Included in the historical Route 66 display area are articles and information about the former town of Times Beach. Exhibits highlight the history of Times Beach, both as a summer resort area on the Meramec River and as one of the nation's environmental success stories. In 1926, land lots in the resort area of Times Beach were offered to the public with a six-month subscription to the St. Louis Times newspaper and an additional $67.50. The area eventually developed into a small town. In the early 1980s, it was discovered that waste oil that had been sprayed on the streets of Times Beach to reduce dust was contaminated with high levels of dioxin. The homes were purchased, and a massive cleanup followed. Once the cleanup was complete, the land was turned over to the Missouri Department of Natural Resources' Division of State Parks, and now, as Route 66 State Park, is once again used for recreation.

The park features level walking, bicycling and equestrian trails that are perfect for beginning riders and health-conscious visitors. On any day, you can see senior citizens bicycling and walking along with their grandchildren, who are busily learning how to ride their first bikes with training wheels. The trails are also perfect for people with disabilities, providing access to miles of pleasant serenity. The trails link to a new trail system in Eureka and will eventually link with portions of Castlewood State Park in Ballwin.

Excellent opportunities to bike, walk, bird watch or study nature are provided. The park area abounds with oak, hickory, river birch, cottonwood and pine trees and is home to a diverse set of plants, many deer and wild turkeys. A variety of more than 40 different bird types have been identified in the park.

In addition to bicycling and walking, the picnic grounds – nestled among the shade trees – offer the park visitor a relaxing place to sit and have a snack, or just time to enjoy the serene splendor of nature.