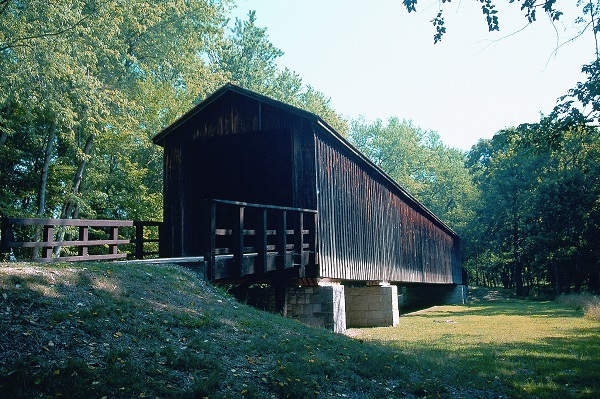 Covered bridges are nostalgic reminders of days gone by. Locust Creek Covered Bridge not only reminds us of how "life's highway" has changed, but also how traveled highways and creek channels can change.

The bridge was built out of white pine using the Howe-truss system, named for William Howe, who patented the design in 1840. The essential features of the design were its use of vertical iron rods to draw the diagonal wooden members tight against the top and bottom of the bridge. The bridge features arched entrances with ramps sloping away from both ends.

Running parallel to the Hannibal and St. Joseph Railroad, the bridge was situated on the main east-west road in northern Missouri. Located midway between Laclede and Meadville, it served a local population that included the young John Joseph Pershing, who became the nation's highest-ranking military commander. As a boy, Pershing swam and fished in the creek near the bridge.

In 1967, nearly 100 years after its completion, the Missouri Legislature passed a bill authorizing the Missouri State Park Board to take possession of, repair and preserve the then-five remaining covered bridges in the state, including Locust Creek. Two years later, after restoration, it was placed in the National Register of Historic Places. In 1991, the bridge was raised 6 feet to give it once again the appearance of a bridge and to protect the floor from wet ground below. Adjacent to the bridge is a kiosk sheltering panels that interpret the history of the bridge.