Where Prairies and Forest Meet 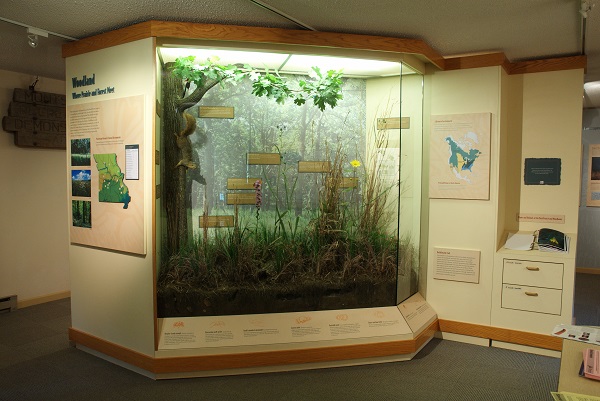 Indian legend relates that the two hills, or "knobs," in the area were raised up as monuments to slain warriors. Settlers to the area later added the Latin word, noster, meaning "our." The local community has been called Knob Noster, "our hill," ever since. The park itself was originally named the Montserrat National Recreation Demonstration Area. It was created by the National Park Service as an example of how marginal agricultural land that had been cleared or mined could be reclaimed for recreation.

By the time the land was transferred to the state in 1946 and renamed for the nearby town, much had been done to develop the park. In the late 1930s, Works Progress Administration and Civilian Conservation Corps workers had built a campground, picnic areas, roads, bridges, service buildings and two large camps for use by organized groups. These accomplishments can still be enjoyed in the park and many of them are listed in the National Register of Historic Places.

The park lies in a transition zone where prairies and forests meet. The writings of a Confederate soldier describe the beauty of this landscape more than 100 years ago. It was a countryside that was neither totally forest, nor totally prairie, but one where tall grasses and diverse wildflowers mingled beneath widely spaced trees. This type of landscape is known as open woodland.

Today, most of the open woodlands has been replaced by dense second and third growth timber that gradually invaded the more open grassy areas. The park staff has been restoring portions of the park to its presettlement condition through controlled burning. Displays in these management areas help visitors appreciate and understand the dynamic forces that have shaped the landscape over time.

A park naturalist is available year-round to conduct nature interpretive programs, as well as ecological stewardship activities. An outdoor theatre, the Lil' Forest Amphitheater, is located in the campground. The park's visitor center contains exhibits that trace the history of the park and its special natural features.

Clearfork Creek, which meanders through the park, bisects the landscape and supports a wide corridor of trees along its path. Dominant trees include several species of oak and hickory, pawpaw, redbud and hackberry. A unique wetland area along the creek, recognized for its natural features, has been designated an official Missouri natural area. Pin Oak Slough Natural Area is a 4-acre oxbow slough, and is home to an elusive member of the orchid family, the pale green orchid.

There are two small lakes in the park that offer visitors an opportunity to fish for bass, bluegill and channel catfish. Picnic sites are scattered throughout the park and three open picnic shelters and playground equipment also help make a day trip to the area enjoyable.

Several types of trails wind through the park. Trails have been developed for equestrian use and all-terrain bicyclists as well as hikers. The Boy Scouts maintain a compass course throughout the park with maps available at the park office and online. Visitors can also hike out to one of the open woodland management areas, and listen to the dickcissels calling in the bluestem grass. At night, sounds of frogs, whippoorwills and barred owls permeate the air. Other wildlife found in the park include white-tailed deer, fox, raccoon, opossum, wild turkey, screech owl, pileated woodpecker, eastern bluebird and great blue heron.

For visitors wanting to enjoy more than just a few hours here, there is a wooded campground with modern restrooms, hot showers, laundry facilities and a dumping station. The two group camps may be used by larger nonprofit organizations that make reservations in advance. The group camps include sleeping cabins, a dining lodge and kitchen, modern restrooms, showers, swimming pool and various other outdoor recreation facilities.