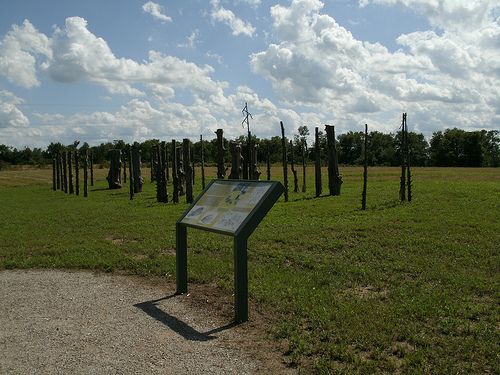 Much of what is now known about the Illinois Indians comes from 17th and 18th century French explorers; all else is from archaeological studies. The word Iliniwek means "we are men," and it is the expression used by 12 tribes to describe their loose alliance with one another. The spelling is based on French phonetics – what they heard spoken – and eventually became "Illinois." The Illinois Indians once included 12 groups, but only five would survive early European contact – Peoria, Cahokia, Tamaroa, Michigamea and the Kaskaskia. At the time of early European contact, the Illinois Indians were spread from about the Wisconsin River to the Wabash River valley in present-day Indiana and along both banks of the Mississippi to the confluence of the Arkansas River. They numbered about 12,500. The Peoria and Moingwena apparently entered present-day northeast Missouri and southeast Iowa around 1640. There were about 8,000 at what is today Iliniwek Village State Historic Site.

The Illinois Indians moved throughout the year. They came to their main village site in the spring and planted corn, beans and squash. They stayed in the village until these crops were well under way, leaving in the summer to hunt bison, deer and bear. They returned to the village in August to harvest the crops and store them in deep pits in and adjacent to the houses. They remained in the village until about November, when they split into smaller remote winter villages spread over the countryside but close enough to return to their stored crops. These smaller villages also helped them to procure furs for the growing fur trade with the Europeans.

The first written account of the Illinois Indians is in a Jesuit Relation (tracts by French priests describing their missionary activities) of 1640, describing the tribes in the upper Great Lakes region. Not much else appears in these records from about 1640-1684. The Jesuit St. Esprit Mission was founded on Chequamegon Bay, in present-day Wisconsin, in 1665 and sometime later the Illinois Indians appear there, trading with the French. Here, Father Claude Allouez learned of the great western river (Mississippi) where more of them lived.

Father Jacques Marquette's account from 1673 provides a detailed account of the visit of the Jolliet and Marquette expedition. Father Marquette had estimated that the village contained about 300 cabins and perhaps as many as 8,000 people and was called "Peourea." The written description of his visit to this village is reinforced by the archaeological discoveries here. Here at the Iliniwek Village, they had four types of houses. A longhouse could quarter several families, from 15 to 25 people. There were also large round houses that held about the same number, and small, oval, single-family houses that probably held from five to eight people. Marquette describes their foods, social customs, ceremonies, dress, use of enslaved people captured in raids, and other interests.

The Illinois Indians began abandoning Iliniwek Village about 1677. After Robert Cavelier, Sieur de La Salle built Fort St. Louis on Starved Rock in 1682-1683 (near present-day Utica, Illinois), all of the Illinois Indians (except for the Michigamea) moved to be near the fort and Iliniwek Village was no longer occupied. The number of Illinois Indians continued to decline through warfare and disease. They ceded most of their land in Illinois by the Treaty of Edwardsville in 1818 and their final tract of land in 1832 as they were forced to move to present day Kansas.

Iliniwek Village State Historic Site is the only Illinois village found in Missouri so far. Archaeological research at the site has revealed the type of life the Illinois Indians lived. A short walking trail leads visitors to the location of one excavated Illinois Indian longhouse that is marked to demonstrate its size. The site also features outdoor interpretive displays and picnicking.