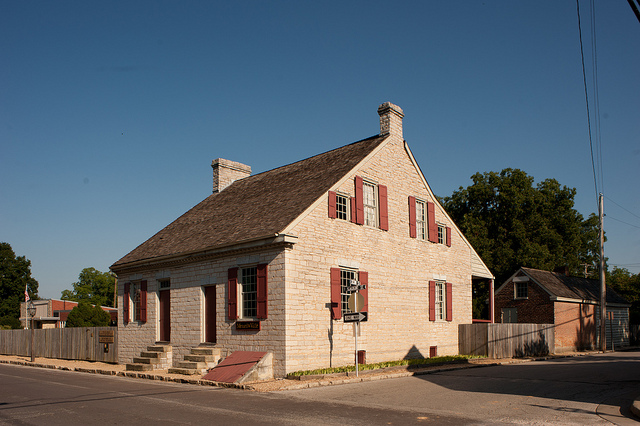 Missouri’s French colonial history is preserved today along the quaint streets and in the charming homes of Ste. Genevieve. The town’s National Historic Landmark District boasts dozens of 18th and early 19th century buildings tracing the community’s remarkable history. Originating as a French colonial settlement, Ste. Genevieve came under Spanish control in 1762, and was finally sold to the United States as part of the Louisiana Purchase of 1803.

Situated on the west bank of the Mississippi River, the village of Ste. Genevieve began as an agricultural settlement in the late 1740s about three miles south of its present location. Populated by French-Canadian habitants, the village was adjacent to the rich, alluvial floodplain that provided much of the region’s grain supply. Following a severe flood in 1785, the village began to search for a new site on higher ground -- the current Ste. Genevieve.

Many elements of Ste. Genevieve’s 18th century streetscape have been preserved in its historic district. Its narrow streets, historic buildings and fenced gardens offer a glimpse of a time when Missouri was part of a vast colonial empire in North America held by France and Spain.

Colonial residents built their log homes using styles and techniques directly related to the farmsteads they left behind in French Canada. This architectural style was adapted to the warmer climate of the mid-Mississippi River Valley by the addition of porches, or galeries, which surrounded many of the homes. Most buildings were constructed from hewn timbers set together vertically, forming the walls. The narrow spaces between the timbers were filled with a mixture of clay and straw, known as bouzillage. A steep, hipped roof covered the homes and resulted in the distinctive rooflines that dominated Ste. Genevieve during its colonial period.

Felix Vallé House State Historic Site is composed of several buildings that preserve and interpret notable examples of the architecture and history for which the community is widely known. The Felix Vallé House, built in 1818, was designed as a combination mercantile store and residence for its original owner, Jacob Philipson. Built of native limestone, its Federal-style architecture demonstrates the American influence on the community in the decades following the Louisiana Purchase. The home was sold to the prominent Vallé family of Ste. Genevieve in 1824 and served as a location for the trading firm of Menard & Vallé, as well as the residence of Felix and Odile Vallé.

Holding firmly to their French traditions, including language and religion, the Vallés embraced "modern" features of life, including an American-style home and American goods brought by steamboat, such as cloth, glass and housewares. Visitors to the home today will experience the period of the 1830s, when the young Vallé couple was beginning to make their mark in the community.

The Dr. Benjamin Shaw House stands just across Second Street from the Felix Vallé House. Built ca. 1819 by Jean Baptiste Bossier, the building served as a store house for his mercantile business. He sold the building to a local physician, Dr. Benjamin Shaw, in 1837. Shaw made significant additions to Bossier’s small building and converted it for use as a residence. Dr. Shaw’s wife, Emilie, lived in the home for more than 50 years, next door to her neighbor, Odile Vallé. The restored building is used for administrative offices and interpretive exhibits.

Also managed by the site is the Green Tree Tavern. The Green Tree Tavern is the oldest verified vertical log building in Ste. Genevieve. Officially dated to 1790 by dendrochronology studies, this poteau sur sole (post on sill) vertical log construction was built by the French Canadian Nicolas Janis. This impressive structure has also been used as an inn, a tobacco store and the first Masonic Lodge in Missouri.

Guided tours of the Felix Vallé House and the Green Tree Tavern are available.