Where Two Rivers Become One 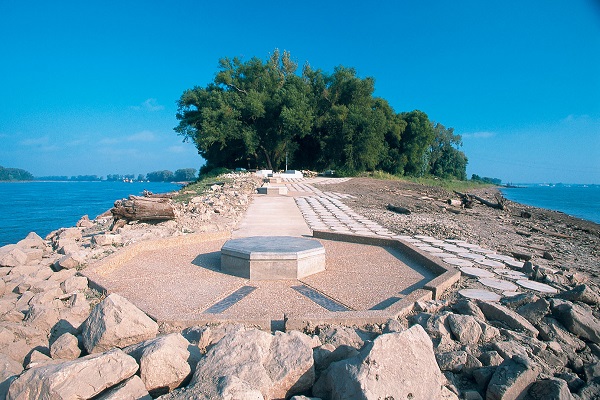 In 1721, French explorer Father Pierre Francois de Charlevoix wrote of the confluence of the Mississippi and Missouri rivers: “I believe this is the finest confluence in the world. The two rivers are much the same breadth, each about half a league; but the Missouri is by far the most rapid, and seems to enter the Mississippi like a conqueror, through which it carries its white waters to the opposite shore without mixing them, after wards, it gives its color to the Mississippi which it never loses again but carries quite down to the sea....”

Nearly 300 years later, visitors to Edward “Ted” and Pat Jones-Confluence Point State Park can still witness the two great rivers of North America as they join and become one. The Mississippi River, the vital highway down which the products of America’s factories and fields travel to the world market, merges with the Missouri River, the wild western river. In 1804, explorers Meriwether Lewis and William Clark hoped the Missouri River was the Northwest Passage leading to the Pacific Ocean. They did not find the Northwest Passage, but at the confluence of the two rivers, they began their epic journey to the Pacific Ocean.

Just as today’s Americans live in a world much changed from that of Lewis and Clark, the two great rivers have changed and continue to change the confluence point. The confluence point is now 2 miles downstream from the point where the Corps of Discovery entered into the Missouri River. The expedition’s keelboat actually floated atop the present-day confluence point, as it was then the river channel.

Early surveys indicate that the land at the point 200 years ago was mostly prairie and marsh with some bottomland forest. The Missouri Department of Natural Resources plans to restore a natural flood plain reminiscent of what Lewis and Clark might have seen along the lower Missouri River. This restoration emphasizes native vegetation and the natural wetlands suitable for the site’s current soil, topography and hydrology. A variety of wildlife currently makes the area its home, including white-tailed deer and beaver. As the park returns to a more natural state, even more species will flock to the bottomland habitat.

The confluence point is one of the area’s best places for bird-watching, as millions of birds migrate along the Mississippi River corridor each spring and fall. The Mississippi River flyway is used by 60% of all North American bird species, including 40% of all waterfowl. Common birds seen in the area include great blue herons, bald eagles, geese, gulls, pelicans and many kinds of songbirds.

The Department of Natural Resources acquired the land that makes up the park through cooperative efforts with several organizations and agencies. An initial 253 acres was acquired through a donation by the Danforth Foundation of St. Louis through the River Network. Later, the Metropolitan Park and Recreation District (now Great Rivers Greenway) in St. Louis leased 515 acres to the Department of Natural Resources to expand the park and funded the park road. A federal North American Wetlands Conservation Act grant, given to acquire, preserve and develop wetland ecosystems for waterfowl, other migratory birds, fish and wildlife, enabled the department to purchase an additional 350 acres. The park is named after Edward “Ted” and Pat Jones, who donated money for the acquisition and development of Katy Trail State Park and have been supporters of the entire Missouri state park system.

Because it is located in a flood plain, the park’s development has been limited to day-use facilities. The park features outdoor interpretive exhibits that give the history of the rivers and explain the role they played in the Lewis and Clark Expedition. A short interpretive trail leads directly to the point at which the Mighty Mississippi and the Big Muddy merge into one.

Edward "Ted" and Pat Jones-Confluence Point State Park is part of the Confluence Greenway, a 200-square-mile network of conservation, heritage and recreation attractions being developed along the Great Rivers in the heart of the bi-state St. Louis region. For more information, visit www.greatriversgreenway.org.