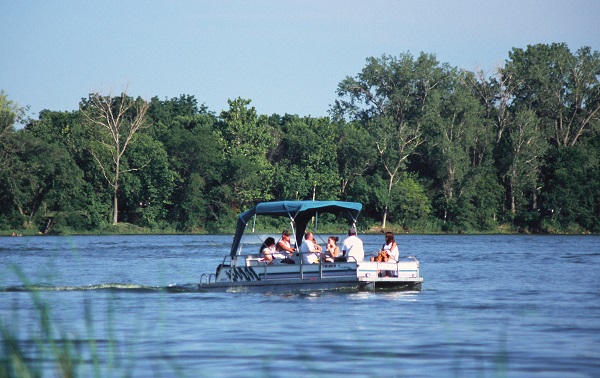 When Europeans first arrived in what is now northwest Missouri, they encountered a maze of shallow riverbeds, bottomland forests, marshes, wet prairies and lakes all teeming with fish, waterfowl and animals. The meandering Missouri River left huge deposits of rich alluvial soils in its unchanneled wake, occasionally cutting off a loop of its own course. As the loops filled with sediment, the water left standing in the loop became what was known as an “oxbow lake” because its 180-degree curvature resembled the “bow” part of an oxen yoke.

Big Lake is the largest remaining oxbow lake in Missouri and has attracted both settler and visitor alike for more than 100 years. Probably formed before the early 1800s, it is thought to be one of the lakes Meriwether Lewis and William Clark described in their journal in July 1804 as they explored the Missouri River and lands contained in the Louisiana Purchase.

The shallow lake has long enjoyed a reputation as a recreational and resort area. As early as the 1850s, cottages and resorts began to spring up around the perimeter of the lake. In the early 1920s, Big Lake featured a four-story 22-room hotel, a store, and two dance halls, which were used for meetings, dances, moving pictures and church meetings.

Several floods, including the flood of 1929, damaged or destroyed many of the businesses and residences around the lake. Following the 1929 flood, interest grew in creating a state park near the lake. The initial acreage for Big Lake State Park was purchased in 1932, creating one of the first public recreation areas in northwest Missouri.