at Lake of the Ozarks State Park 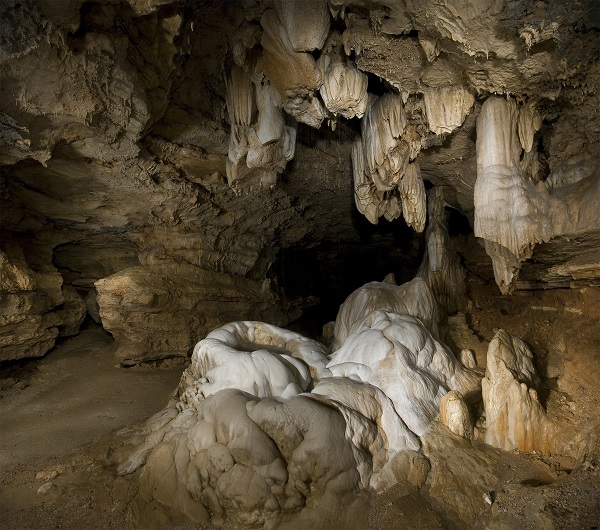 Out of caution, all planned group tours or school groups, including tours at the Missouri state Capitol, are suspended through April 30 in order to avoid large congregations of people in confined areas. In addition, all indoor guided tours, including tours of historic buildings and caves are suspended through April 30. Self-guided tours of visitor centers, museums and nature centers remain open at this time.

Visit Ozark Caverns in Lake of the Ozarks State Park and discover what lies beneath the surface!

Caves are common geologic features in areas like the Ozarks, which is underlain by thick layers of soluble carbonate rocks such as limestone and dolomite. Water, seeping through subterranean cracks in these rock formations, begins to enlarge some of the fractures. As the dissolving action of the water continues, the cracks eventually become large, water-filled conduits that form parts of extensive underground drainage systems.

As these water-filled systems gradually are drained by deepening surface valleys, they become the air-filled passageways we know as caves.

A walk through Ozark Caverns is a journey through one of these large, drained conduits. It is a walk into an environment where geologic processes can proceed unhindered by many of the erratic, erosive forces that shape the surface landscape. In the protected cave environment, dripping and seeping water can redeposit carbonate materials in the form of soda straws, helictites, stalagmites and a host of other geologic wonders that can be seen in Ozark Caverns.

Angel Showers, an unusual cave phenomenon, is a featured part of the Ozark Caverns tour. The never-ending shower of water seems to come out of the solid ceiling of rock.

The protected cave environment also allows visitors to contemplate the claw marks left in the sediment fills by animals that sought shelter here thousand of years ago.

There is also much to see on the surface. Coakley Hollow Trail, which is a one-mile, self-guiding interpretive trail, begins and ends at the caverns parking lot. This trail crosses a variety of habitats including a glade, fen and an Ozark spring branch. It is also a good place to see spring wildflowers. Trail booklets are available at the visitor center. There are ample picnic sites on the grounds. 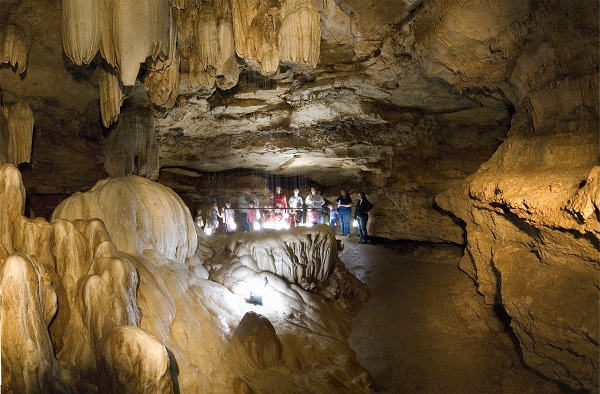 This interpretive tour lasts approximately one hour and is a half-mile round trip. Topics discussed include general cave development, speleothem formation, cave life or other topics visitors wish to discuss with the guide. Appropriate for all ages. Tours are temporarily suspended now through April 30.

This interpretive tours lasts 30 to 45 minutes and is about a quarter-mile round trip. Designed for children ages five and above, this tour will give children a chance to learn and explore the cave on a basic level. All children must be accompanied by parents. Tours are temporarily suspended now through April 30.

The cave is 56 degrees Fahrenheit. A light jacket is recommended.

Fees do not include tax. Qualified tax-exempt organizations must provide a copy of a tax exempt certificate at the time of payment.