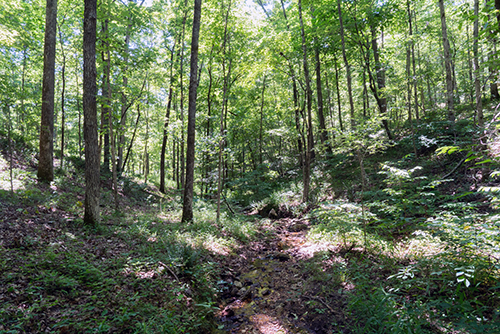 Located in southern Douglas County, Bryant Creek State Park spans rugged, steeply dissected river hills bordering the stream for which it is named. Bryant Creek is a scenic, high-quality main tributary of the North Fork River, a popular floating and fishing stream and one of the best small river habitats in the White River Basin. The park features 1.67 miles of direct creek frontage, as well as four major tributary hollows and at least four springs.

Long before there were roads and highways, American Indian tribes such as the Osage and early-19th-century frontiersmen used preexisting game trails, rivers and streams, including Bryant Creek, to navigate the Ozark landscape. Hunters and trappers were among the first Europeans to explore the region, attracted by the isolation of the area along with its abundant game and numerous navigable rivers and streams. It was one such hunter and trapper, settling near the creek around 1830 in what would later become Douglas County, who lent his name to Bryant Creek.

A wave of immigrants followed the early frontiersmen, mostly arriving from western Tennessee and Kentucky, as well as the Appalachian region of the eastern United States. Drawn by the promise of cheap land and the fact that the area was sparsely populated, the incoming homesteaders took advantage of the forested landscape and rivers to establish logging operations and sawmills. However, the terrain made large-scale agricultural cultivation difficult, so much of the native flora and fauna the early homesteaders would have encountered still survives.

The park’s varied topography and complex geology continues to yield a diverse range of natural communities and ecosystems, including glades, fens, forests and riparian zones, which supports a rich array of native plants. Oak and oak-pine woodland envelopes tall dolomite cliffs, moss-draped sandstone outcrops, fern-lined glens, wet-weather waterfalls, springs and sinkholes. Within these woodlands are extensive groves of shortleaf pine, Missouri’s only native pine tree. The park is also home to at least 60 kinds of mosses, liverworts and hornworts. In all, Bryant Creek contains 940 kinds of plants, nearly a third of Missouri’s total known species of flora.

This extensive forest cover provides significant wildlife habitat, especially to migratory birds. Nearly 70 species of birds are known to nest in the park, and many more pass through during spring and fall migrations. Meanwhile, mammals such as black bears, bats and bobcats find shelter in the small cavities and overhangs of the sandstone ledges.

The State of Missouri purchased Bryant Creek State Park in 2016 in order to preserve the area’s high-quality native woodlands, forest ecosystems and watershed, while also providing recreational opportunities for the public. The park is still in the development phases but currently has two completed hiking trails, an accessible overlook, a vault toilet and a finished parking area. When it is fully developed, the park will offer two day-use areas with parking, picnic tables, vault toilets, potable water and informational/interpretative kiosks. A camping area with fire rings and picnic tables will also be established for primitive camping. Eventually, visitors will be able to hike, bike or ride their horses on specially marked trails throughout the park.