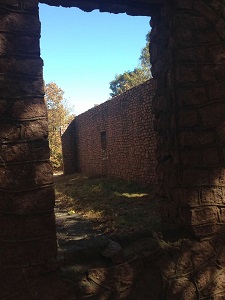 The area’s interesting geology also played a key role in its cultural history. Just outside the park is the oldest recorded commercial granite quarry in the state, producing fine red granite called “Missouri Red.” This quarry, opened in 1869, furnished facing stone for the Eads Bridge piers standing on the Mississippi River levee in St. Louis. From 1880 to 1900, millions of paving blocks for the St. Louis levee and downtown streets came from this quarry. Other nearby quarries supplied granite for many major St. Louis buildings as well as stone for the turned columns on the front porch of the Governor’s Mansion in Jefferson City. Today, this granite is used primarily for monuments, building veneer and crushed stone aggregate.

The higher quality granite blocks produced from quarries before the area became a state park were used for building homes and other structures. The flawed and damaged stone was hammered into blocks, which were used for paving streets. Roughly the size of a shoebox, these granite paving blocks sold for about 8 cents each. At that rate, a good block maker, producing 50 blocks per day, could earn $4 a day. That was considered a pretty good wage for a very hard day’s work.

To transport the granite blocks, the quarries relied on the railroad, mainly the Iron Mountain and Southern Railroad. In the 1890s, the railroad provided service to Sheehan Quarry operations in what is now the state park. By 1902, 16 granite cars were being operated regularly, shipping Missouri red granite throughout the country. The ruins of an old engine house originally built to repair train engines and cars still stands in the park and can be accessed by the Engine House Ruins Trail.

The nearby settlement of Graniteville, in its day (circa 1890), boasted a population of more than 700 people, making it the largest town in the area. Most of the town was built and owned by the quarry company. Walking down the street, visitors would have seen a hotel, post office, store, railroad depot and numerous homes. Today, only a few of the original granite buildings remain, including an impressive stone schoolhouse and several homes.