How long have you been a volunteer?
Six years

Why did you become a volunteer for the Katy Ride?
In 1998, I turned 40 and decided that I was going to go on the Katy Trail Ride. I had such a good time on the ride, I took the class to be a volunteer in Boonville and have been with the ride since.

What is your favorite part of the ride?
I love registration on the first day. Cyclists are a very nice, courteous and a fun group as a whole. You can tell what kind of ride you will have by the people’s personalities as they check in. It sets the tempo for the week. 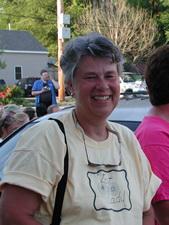 Name: Sara Yates
From: St. Louis
Has been a Katy Trail volunteer since 1996.

What is your favorite thing about the ride?
The people and the friends at the ride. 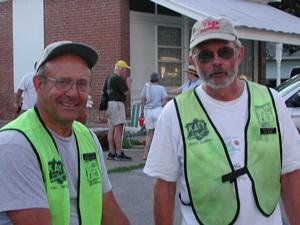 Anyone who has ridden on the Katy Trail bike ride is familiar with Jim Howard and Jim Smith. The two have been friends for a long time and are two of the most humorous and fun Katy Ride volunteers you can meet on the ride. The two originally volunteered for the CAMP rides and have volunteered for the Katy Ride since the beginning. When asked how they became volunteers, Jim Smith saw an ad to become a volunteer at Rock Bridge Memorial State Park. Smith invited Howard with him to the information meeting at the Lewis and Clark Middle School in Jefferson City. From there, they attended the new volunteers’ class in Boonville and the rest is history. 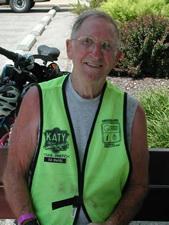 He is an expert of on trail since he has walked the trail six times and after this ride it will be his 11th trip by bike. He has been a volunteer on the Katy Ride since 1996. His favorite spots on the trail are the Treloar area and Rocheport to McBaine. When asked what his favorite part of the ride is, he simply stated the camaraderie on the ride.