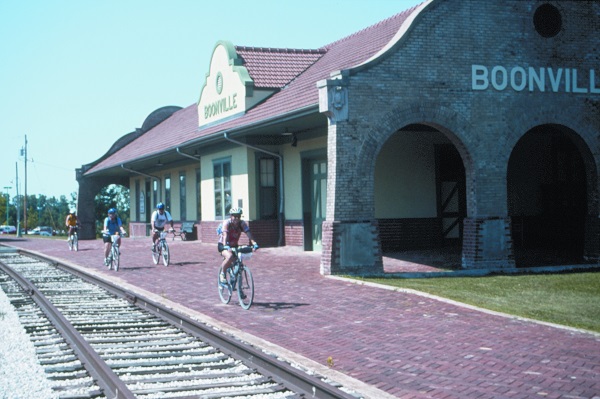 History and Much More

Katy Trail State Park is built on the corridor of the former Missouri-Kansas-Texas (MKT) Railroad, better known as the Katy. When the railroad ceased operation on its route in Missouri from Machens in St. Charles County to Sedalia in Pettis County in 1986, Missouri State Parks was able to acquire the railroad right-of-way through an amendment to the National Trails System Act. The amendment allows railroad corridors no longer needed for active rail service to be banked for future transportation needs and used in the interim as recreational trails. The right-of-way was secured through a generous donation by the late Edward D. “Ted” Jones Jr. and his wife, Pat. Construction of the Katy Trail began in 1987. The first section of trail at Rocheport was opened in 1990. The trail’s 25th anniversary was celebrated in 2015.

In 1991, the Union Pacific Railroad donated 33 miles of rail corridor from Sedalia to east of Clinton. Additional purchases and donations were added throughout the years, completing the final 240-mile trail with Machens as the eastern terminus and Clinton as the western terminus.

The trail allows users to travel through some of the most scenic areas of the state. The majority of the Katy Trail closely follows the route of the Missouri River so trail users often find themselves with the river on one side and towering bluffs on the other. The trail travels through many types of landscapes including dense forests, wetlands, deep valleys, remnant prairies, open pastureland and gently rolling farm fields. In the spring, the trail is brightened with flowering dogwood and redbud, while the fall is colored with the rich reds and oranges of sugar maple, sumac and bittersweet.

Trail users are reminded of the trail’s railroad history as they catch glimpses of old telegraph poles and other remnant pieces of the railroad’s past. The trail passes over numerous pony-truss, through-truss and trestle bridges on its route. Four fully restored historic depots evoke the bygone grandeur of passenger service on the MKT, while the stone railroad tunnel at Rocheport recalls the ingenuity required to complete the MKT rail line.

Katy Trail State Park also takes users through a slice of rural history as it meanders through the small towns that once thrived along the railroad corridor. These communities make great places to stop and explore during a visit to the trail, since the majority are located adjacent to designated trailheads. Many of the communities offer various services to trail users, such as lodging, dining and shopping.

The trail’s 26 trailheads typically provide parking and restrooms while some also provide water fountains; plan ahead since water is turned off and flush restrooms are closed Nov. 1 through March 31.

As the son of the founder of Edward Jones, Edward D. “Ted” Jones Jr. spearheaded the St. Louis-based financial services firm’s expansion from the 1950s through the 1980s by opening one-broker offices serving investors in small communities. All the while, Ted maintained his lifelong love of nature, living in rural Callaway County, Mo., with his wife, Pat.

Ted became interested in “rails-to-trails” projects after a bike ride on a converted Wisconsin railroad trail, and he began lobbying the Missouri legislature to use land abandoned by the Missouri-Kansas-Texas (MKT) Railroad (known as the Katy) for a similar project. He and Pat donated $2.2 million to help purchase the rail corridor and turn it into the longest continuous hiking and bicycling trail in the country.

Ted and Pat were able to celebrate the results of their work when the Katy Trail State Park opened on April 28, 1990. Their proud moment came just six months before Ted passed away.

Since that time, Edward Jones has continued the growth Ted started while maintaining his down-to-earth values and commitment to community service. Today the firm serves investors from more than 15,000 branches throughout North America. 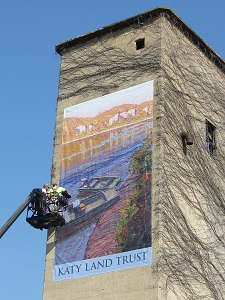 Preserving farms and forests along the Katy Trail