Much less important to the geologist, but much more fascinating to the tourist are the speleothems, commonly called "cave formations." (We try to use "speleothem" to avoid confusion with the geologic rock formations like the Eminence.)

Speleothems form as long as rainfall enters the cave after passing through plant debris (humus) and carbonate bedrock. The rate at which speleothems form depends upon the amount and rate of water entering the cave, the amount of acidity and minerals in the water, and the temperature and humidity conditions in the cave when it enters. If it is a dry year, speleothems may not grow at all, and if we have optimum conditions they may grow a lot. The chemical process was described earlier. Just about all the speleothems in Onondaga Cave are calcite or aragonite; two crystal forms of calcium carbonate. Most of our speleothems are calcite; the more common form. Pure calcite is clear, in a variety known as Iceland spar, but the most common variety is white, the color which results when it is mixed with microscopic water or air molecules.

Other colors of speleothems are:

Yellow-tan-brown: impurities of tannic acid from decaying leaves, other organic matter or just plain dirt. This coloring is washed in from the surface. Orange-red: probably derived from the cave clay. Cave clay is the residue from dolomite decomposition, and consists of magnesium and (surprisingly little) iron hydrolyzed aluminosilicates. Red-brown to chocolate brown: Rusty looking, from iron oxides. Gray and black: usually manganese, occasionally stains from bat guano, lead or other impurities. Green: impurities of glauconite, a clay/shale, primarily potassium iron silicate, found between layers of dolomite and used in textile, sugar and brewing industries as fertilizer and as a coloring agent. Around light sources, it may be algae. Pink: Probably not calcite at all, but speleothems formed by dolomite. Not common here. Other colors: uncommon, mostly organic or human markings in origin.

Stalactites are the granddaddy of speleothems. They form when that first drip of water leaves a bathtub ring of calcite as it falls. Drop by drop, the calcite collects, forming a hollow tube, or soda straw, of crystallized calcite. Soda straws are quite common up to about a foot in length, and (in other caves with the right conditions) have been known to grow to tens of feet. Usually, though, the tube becomes plugged, and the water flows down the outside of the soda straw, forming the icicle looking stalactite. A stalactite with water flowing on just one side may become a thin drapery blade or bacon rind.

Stalagmites form when calcite-laden water splashes on the floor. The shape of stalagmites depends on gravity (they are round tipped, whereas stalactites are pointy) and often have a splash cup at the end or otherwise resemble candles from the spatter of the mineral laden water. Stalactites stick tight to the ceiling; stalagmites grow mightily from the ground--a silly but very effective way to keep these two names attached to the proper formation. 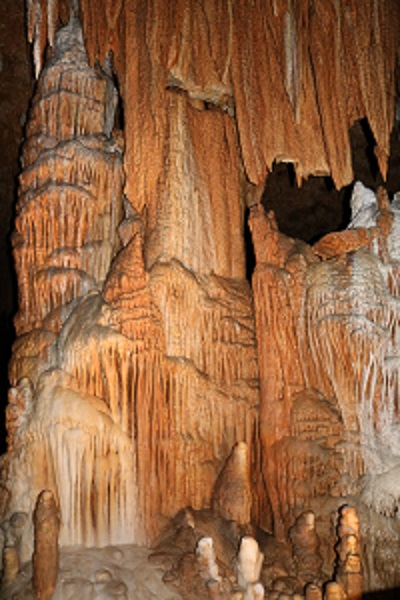 Stalactites and stalagmites often grow in pairs, and sometimes grow together forming columns. But sometimes, they grow singly, or in very uneven sizes. Stalactites over water will not form stalagmites. A slow drip on a stalactite may deposit all its calcite on the ceiling and leave little to form a stalagmite. With a fast drip, or steady stream, little calcite may stick to the ceiling, but instead build up a large stalagmite.

Soda straws, stalactites, stalagmites and columns are called dripstone because they are deposited by dripping water. Flowing water can also deposit calcite down a wall or across a floor. This is called (surprise!) flowstone. Water in a cave stream can build up flowstone across the stream, called rimstone dams, as the tumbling action of the water shakes loose carbon dioxide (just like shaking a can of soda pop does) and causes calcite to be deposited. Rimstone dam pools are often good aquatic habitat. 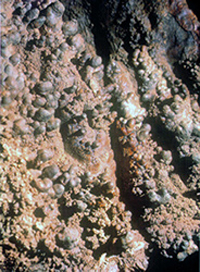 Cave coral or "popcorn" is unusual in that it can be deposited either above or below water. If an area is uniformly coated with coral, it is a good bet that it formed underwater.

Sometimes the water in cave pools becomes so saturated with calcite that it simply falls out of the solution because of its release of carbon dioxide gas, and the inability of the water to hold any more mineral in the solution at that temperature. Just as rock candy forms from evaporating a saturated sugar solution, some cave coral and botyroidal (grape-like) speleothems grow underwater in this fashion. Onondaga Cave's famous "lily-pads" began as shelfstone, accumulating around existing stalagmites and shore flowstone, just like those sugar crystals eventually crust the sides of the pan, and the strings suspend in it. The varying levels of the pools allow new deposits to grow, dry out and grow again, eventually growing upward, as well as horizontally.

Sub-aerial (formed in air) cave coral is actually more common than that formed in water. The easiest way to tell them apart is: sub-aqueous cave coral often shows a ring of shelfstone, or a distinct "waterline" below which is covered with the knobby stuff, and above which there is little if any. There are five ways cave coral may form in the air:
1) water seeping through the bedrock and the crystal structure of the knobs itself;
2) thin films of water flowing over irregular surfaces;
3) splash from dripping water;
4) water moving up walls by capillary action; and
5) condensation from humid cave air.

All result from thin films of water moving over rock, and the subsequent evaporation deposition of the calcite in the pattern mentioned above. Cave drafts seem to be a controlling factor in this deposition, more than just simple gassing off of carbon dioxide. Such drafts result in "photo-tropic (light-loving) cave coral," such as that in Cathedral Cave, where the coral deposits are largely on the side of the speleothem facing the entrance. The theory here is that the colder, drier air on the "out" side of the cave causes evaporation to occur much more rapidly than the steady state of a still cave. Or, perhaps the cave, barometrically breathing "in" during Missouri humid and wet summers, drew more moisture into it at these times, causing water to condense along the stalactites and stalagmites, a condensation which evaporated, whilst drawing mineral out of the existing speleothem for surface deposition.

Sometimes, when the water is quite still, calcite crystals form on the surface, making calcite ice or calcite rafts. These are quite fragile, and will sink at the slightest stirring of the water.

Helictites are crazily growing calcite structures, most often resembling snarled roots or potato sprouts. It is believed they grow as the result of capillary action, as the water seeps from the rock and is then pulled along through tiny, internal canals within the depositing crystal structure instead of yielding to gravity. Nearly freestanding speleothems, called shields, are supposed to grow in a similar manner, but along hairline cracks in the bedrock, instead of circular pores. The cave shield in the Rock of Ages room is one of only a few in the United States.

Cave pearls, a fairly rare speleothem, are formed similarly to a pearl, as a piece of sand or grit is rolled underwater and coated on all sides with calcite. Constant movement of the pearl in a waterfilled depression keeps it from becoming attached to the bottom of the pool. Cave pearls can grow to several inches in diameter.

Chert is a sedimentary rock, largely quartz (SiO2), but with varying amounts of calcium silicate and other impurities. It is harder than dolomite. Chert in Onondaga Cave reveals itself as dark pendants, nodules and reef structures, mostly noticeable in the cave ceiling. Wherever an irregular, dark brownish protrusion from the dolomite occurs, it is a good bet it is chert. Missouri chert has a higher percentage of calcium in it than other microscopically crystalline varieties of quartz elsewhere; this accounts for the dull finish and easier weathering of this rock than say, chalcedony or flint. Chert was deposited in the prehistoric oceans from dissolved molecules of silica gel clumping together and precipitating; it formed its microcrystalline structure as it chemically lost its water molecules. Chert is usually full of fossils; in the case of the stromatolites, it preserves blue-green algal reefs. Many of the rocks in the cave streams are chert gravel.

There are two kinds of clay in Onondaga Cave. The red, sticky slick clay (known as unctuous clay) comes from decomposed dolomite, which is why it persists along ceiling shelves and out of the way places. This clay is red because of the minerals it contains (mostly magnesium and iron aluminosilicates bound with hydroxyl ions), but chemically it has much less iron than one might expect from the color. Scientists have found out that temperature, humidity and pH during decomposition also determine how the clay forms. Bretz (1956) theorized that cave systems evolved as dolomite, soaked in acidic groundwater, broke down the rock, leaving passages filled with clay. If sufficient water continued to flow, eventually the clay washed out, leaving cave. If the water flow decreased, so did clay transport, refilling the cave passage. In some places in Onondaga Cave, this cave clay is probably 60 feet deep. We know it underlays some flowstone caps; the King's Canopy is a flowstone natural bridge that formed over clay which later washed away. Cracked speleothems, which are later recemented, often occur as a result of the clay cave floor drying out and shrinking, thus lowering the floor level. The brown mud in Onondaga Cave washes in from the outside, both through the ceiling and during Meramec River backflooding. Yes, the cave does occasionally flood, covering the trail in the Grand Canyon passage. This only happens gradually, and there is no possibility of visitors being trapped in the cave.

Both cave clay and mud preserve animal tracks and bones, both ancient and modern, in the cave. Human remains have never been found in Onondaga Cave. Because the only natural entrance to Onondaga Cave is through the spring, it is unlikely that prehistoric man used the cave to any extent.