How Caves are Formed

A cave is a naturally occurring underground void, large enough to be examined in some way by man. In other words, a cave is a space, more than a thing, and nearly any underground void in rock--whether air or water filled--can be called a cave. For the purposes of the Missouri Cave Files, a cave is greater than 20 ft. in length or otherwise significant. This significance is undefined, but may be archaeological remains, endangered species, historical significance, etc. "Cave" and "cavern" designate the same space. Popular usage implies that a cavern is larger; however, since Mammoth Cave, Kentucky, the world's largest at more than 350 continuous miles, is called a "cave," this argument is obviously false. Caves are formed in all sorts of rocks (igneous, sedimentary, metamorphic) by all sorts of processes: volcanic, tectonic or earth movement, water or physical erosion, and chemical solution. Lava tubes, fracture caves, sea caves, and sandstone shelter caves are examples of caves formed by volcanoes, earthquakes and the abrasive forces of water and wind. But when most people think of a cave, they think of one like Onondaga, formed by chemical solution in carbonate rock. Limestone and dolomite are the most common carbonate rocks that form solution caves. Gypsum is another common mineral formed in carbonate caves by cave making processes, though it is uncommon in Missouri caves. Onondaga Cave is located in Gasconade and Eminence dolomites. 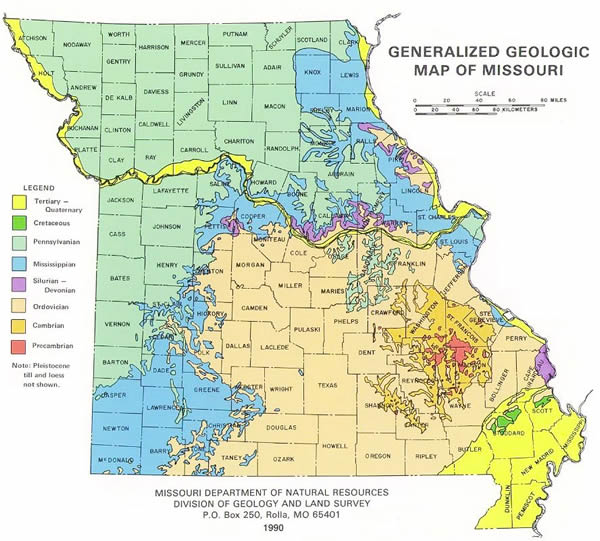 How is cave rock formed?

A layer of sedimentary rock is laid down on top of the igneous bedrock, usually as a result of an area being covered by prehistoric seas. The hard body parts of dead sea animals, along with precipitates from seawater and sediments from the land, fall to the sea floor and are changed to stone by extreme pressure and the resulting temperature. What sort of sediments collect vary with the depth and location. Calcium, magnesium and dissolved silicates are more common in deeper water, with silt, mud and sand more common toward the prehistoric shore. Quantities of sediment and ancient sea currents also determine the depth and shape of these deposits. Sedimentary rock is a continuum of types (because they are physical mixtures), with mudstones, shales, sandstones, limestones, dolomites and chert often grading into one another.

Dolomite is a sedimentary rock. Geologists think it forms in two ways - either by direct precipitation from solution, or a replacement after limestone. After a limestone is formed, it is then subjected to magnesium rich waters at depth (perhaps by reimmersion in sea water) with the heat and pressure recrystallizing the rock, changing its chemical structure, changing it to dolomite. This recrystallization eliminates most fossils, except those already preserved by chert. Because most of the characteristics of the rock remain similar (hardness, color, etc.) it is not considered a metamorphic rock.

Next, the seas retreat as a result of the increasing sea floor height, uplift from below, climate changes or some combination of them. The drying of the new land and external pressures cause the new rock (known as geologic formations) to crack, both horizontally between layers forming separations along bedding planes and vertically, forming joints. Erosion begins along the upper surface and along these cracks, as wind and water attack the rock. This erosion physically makes rock particles smaller and chemically dissolves some minerals, leaving insoluble residues behind as clay. When the clay becomes mixed with dead vegetation, it becomes soil.

If clay and soil accumulate faster than it is removed (and the land itself is fairly flat) carbonate based plains result. Most rainfall leaves the area in surface streams. That which makes it to the water table must go through deep clay subsoil to get there, and does so with a slow, percolating action. The water table is usually fairly uniform over a wide area. In short, groundwater under carbonate based plains acts much like you were taught in school, forming few major springs and only rarely accessible caves.

What makes a cave?

When the bedrock is highly fractured, or the beds of rock tilted due to uneven uplift, a karst topography often results. Water very easily penetrates the rock under these conditions. The protective layer of soil and clay is thin, and more easily washed away, leaving more rock to erode. Surface streams are the exception, rather than the rule, as water enters the groundwater directly, through ever widening cracks. Some of these cracks are beneath surface streams, forming losing streams. It is in karst that these usual solution features form: springs, sinkholes, natural bridges and caves. A combination of physical erosion and solution erosion forms these features. Karst groundwater has only minimal filtering as both the open access to the surface and the rapid rate at which the water goes underground does not have the tiny spaces or time to remove the debris from the water. The underground openings of various sizes and at various depths make the "water table" more resemble a network of milk jugs connected by different size straws and pipes.

Carbonate caves are formed by processes both inside and outside the earth. What happens when a cave forms is this: rain on the surface of the land enters the ground after having picked up dissolved carbon dioxide gas from the atmosphere and decaying plant matter in the soil. This water reacts with the carbon dioxide to form a weak carbonic acid solution.

Carbonic acid (which is the same thing that gives soda pop its fizz) will dissolve calcium carbonate from limestone and dolomite, forming a solution of calcium bicarbonate in water.

This process actually dissolves the rock, forming cave passages over hundreds of thousands to millions of years. At this point, the cave is waterfilled, without an opening. This charged water moving through the rock also scours the walls of the passage, so the making of cave passages is partially chemical and partially water, or mechanical. Changing water temperatures and amounts of chemical in solution sometimes causes calcium carbonate to fall out of the solution, or precipitate while the cave is still water filled; but this is a minor part of speleothem growth. Clay can accumulate if the water is not flowing fast enough.

While the underground passage is growing larger, the surface above is continuing to erode, lowering the water table, and allowing air into the cave. Soon the cave becomes partially air filled. When this happens, some of the dissolved carbon dioxide escapes and changes the acidity of the water. As the mineralized water goes "flat" (just like a soda), the calcium carbonate comes out of the solution, and is deposited as crystallized calcite or speleothems -

- miscalled "cave formations," which draw visitors to caves like Onondaga. Erosion continues and surface streams cut their valleys. Joints intersecting the surface enlarge, forming sinkholes. The general level of the land lowers until either a downcutting stream or a sinkhole intersects the cave stream, forming a spring or a karst window and further draining the cave.

A cave is a changing environment. Spring supply passages are waterfilled caves that have not drained yet. Most Missouri caves are wet, with permanent cave streams. Some are still enlarging their passages, and most are still depositing speleothems. They may have levels, which are still underwater, and streams, which get their water from farther away than the immediate area. Other cave systems, such as Mammoth and Carlsbad, have sections which are "dead" and are no longer enlarging nor growing speleothems; both of these systems have "live" sections as well, but the average tourist rarely visits there. The final stage of a cave is collapse. Eventually, the roof will get thinner and thinner and fall in, exposing the cave. A good example of this is at Grand Gulf State Park, where a cave is now a huge sinkhole with minor caves, which were once side passages.