A Link to Days Gone By 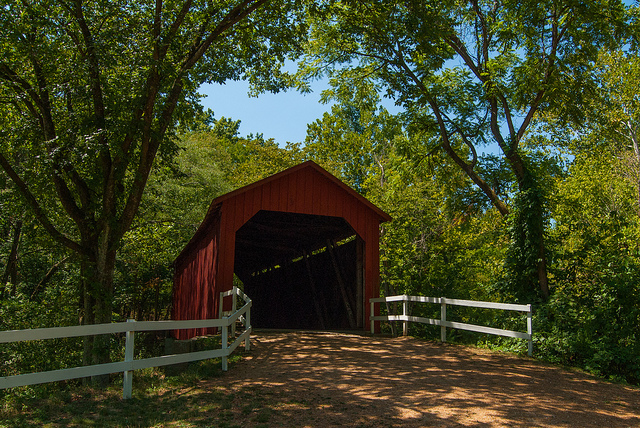 John H. Morse constructed Sandy Creek Covered Bridge in 1872 as part of a countywide building program in Jefferson County following the Civil War. Morse made a proposal in May of that year to span Sandy Creek with a "wood covered bridge" 74 feet, 6 inches long and 18 feet, 10 inches wide, with an entrance height of 13 feet. It was one of six covered bridges built on the Hillsboro and Lemay Ferry gravel road connecting the county seat of Hillsboro and St. Louis.

Although there were many advantages to the shelter with the roof and sides, the main purpose behind covering bridges was to protect the intricate structural network of iron and timber trusses from the weather. The coverings also added strength, which reduced sagging and listing. Riders in uncovered buggies and carriages often used the bridges as shelters from the wind, snow and rain.

Morse built Sandy Creek Covered Bridge using the Howe-truss design, named for William Howe. Howe patented his design in 1840, which featured the use of vertical rods to draw wooden members tight against the top and bottom of the bridge. Three of the four remaining covered bridges in Missouri were built using the Howe-truss design, including Sandy Creek, Burfordville and Locust Creek covered bridges.

Sandy Creek Covered Bridge remained intact until the spring flood of 1886 destroyed it. In August of the same year, Henry Steffin rebuilt the bridge to the original specifications and approximate configurations, using some of the original timbers and abutments. The project cost the county $899.

In 1967, the Missouri Legislature passed a bill authorizing the Missouri State Park Board to take possession of, repair and preserve the five remaining covered bridges in the state. The Mexico covered bridge washed away by a flood before ownership could be transferred to the state, leaving only four.

Sandy Creek Covered Bridge was listed in the National Register of Historic Places in 1970. By 1984, extensive flood damage demanded a thorough restoration of the bridge. Today, the bridge is open only to pedestrian traffic.

After taking a stroll across the bridge, visitors can learn more about the history of the bridge on the outdoor interpretive display, then sit and enjoy a picnic lunch in the shaded picnic area near the bridge. The red barnlike appearance of the bridge and the natural setting surrounding it make an ideal scene for photographs or paintings.

Visit all four of Missouri's remaining covered bridges, each with its own story and style. Burfordville Covered Bridge, Cape Girardeau County, is part of Bollinger Mill State Historic Site. Both historic structures side-by-side provide artists and photographers with a picture-perfect setting. Locust Creek Covered Bridge, Linn County, once housed the nation's first transcontinental road, Route 8. Union Covered Bridge, Monroe County, is the only example of the Burr-arch truss system in Missouri. It served Monroe County for 99 years and remains an important structure in the area's history.

Missouri's surviving covered bridges are precious examples of fine craftsmanship using simple but effective engineering techniques. They serve our generation as eloquent reminders of the texture of life in days gone by.