at Sam A. Baker State Park 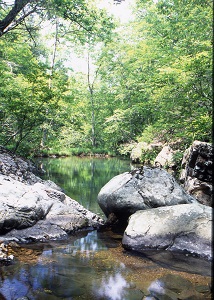 The natural history of the park dates back to Precambrian times when volcanoes created the unique igneous rock that is the park’s geological foundation. The Mudlick Dellenite is some of the oldest exposed rock on the North American continent. A period of great erosion carved the landscape into the knobs and valleys of one of the oldest mountain regions of North America. Mudlick Mountain, a dominant feature of Sam A. Baker State Park, is one of these ancient knobs.

The St. Francois Mountains also possess unique geologic features known as shut-ins. Shut-ins consist of masses of hard, erosion-resistant igneous rocks that remained after softer sedimentary rock was washed away by a down-cutting stream. The result is a canyonlike gorge with solid rock ledges and large igneous boulders along the bottom. The constant flow

of water has smoothed the huge boulders and polished them to a dull sheen. Shut-ins can be seen in both Big Creek and Mudlick Hollow.

Mudlick Mountain Wild Area represents one of the largest wilderness preserves in the Missouri state park system. It features Mudlick Mountain, one of the most distinctive igneous domes in the St. Francois Mountain region. Reaching 1,313 feet, Mudlick Mountain provides unobstructed vistas of the surrounding landscape. This 4,420-acrea wild area captures the atmosphere of vastness and primitive solitude experienced by early pioneers.

You can view the wild area from Mudlick Trail, which traverses through a variety of natural communities, such as old-growth oak-hickory-pine forest, deep canyon
gorges, gravel washes and open glades.

The 1,370-acre Mudlick Mountain Natural Area includes one of the most significant, undisturbed natural landscapes in the park. It provides an outstanding example of the effects of climatic conditions on mountain summit forests. 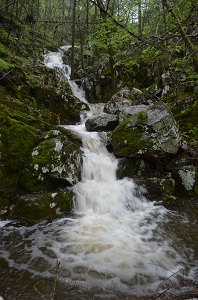 For thousands of years, white oaks, black oaks and other Ozark forest species have been subjected to lightning, wind and ice, resulting in a bizarre array of growth forms. Many of the trees on the summit, which normally would have grown tall with a single trunk and a crown of limbs, stand with stunted trunks, knobby scars and perhaps a single limb—the victims of repeated strikes by lightning. Natural fire kept the woodlands free of brush. Active ecological management of the landscape still uses fire to maintain park woodland, glade and pine communities.

Other significant natural features include towering igneous bluffs, glades and talus slopes, also known as “rock glaciers.” Glades, Missouri’s version of desert, are dry, rocky grassland openings in the forest. Talus slopes are built up from rocks that have fallen from the bluffs above. The vegetation growing on the talus slopes has adapted to the rocky soils. Wildlife in the natural area includes deer, raccoon, red fox, beaver and a variety of birds, including summer tanagers, orioles and red-shouldered hawks. The natural area can be accessed via Mudlick Trail.