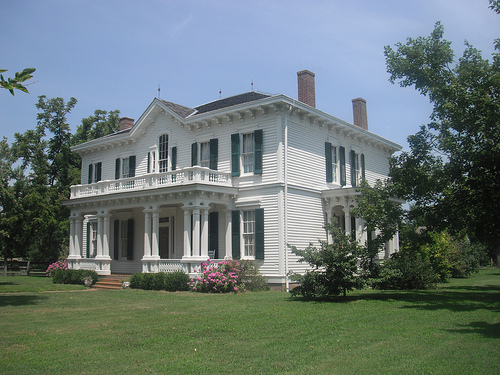 The Hunter-Dawson home illustrates the lifestyle and culture of one particular wealthy southeast Missouri family prior to the Civil War. However, such houses and culture were not uncommon along the Mississippi River in this part of the state.

Because of its location on a bend in the Mississippi River, New Madrid was a thriving river port prior to the Civil War. New Madrid residents, William and Amanda Hunter, were very successful in the mercantile business having a large dry goods store – the Crystal Palace – in town as well as a floating store used to peddle goods to other towns along the river. They also bought large quantities of land, eventually holding 15,000 acres in four states.

The Hunters planned their house, which was built of yellow cypress probably processed at a sawmill owned by them. The Hunters owned up to 36 enslaved people, some of whom may have helped build the house along with hired craftsmen. It exhibits Georgian, Greek Revival and Italianate architectural features – popular styles during the antebellum period – and took nearly a year to construct, being finished in May of 1860. William died of yellow fever in April 1859 before the house was finished, but Amanda and her seven children moved into the house during 1860-61. After her husband's death, Amanda, her sons, and her brother continued to run the family's enterprises, which included the store, a gristmill and a lumber mill.

Through the extension of personal credit to many people in the area, the community of New Madrid retained some semblance of solvency during the Civil War. Missouri was a divided state during the war, but the town was distinctly Southern in its character. One of the Hunter boys served in the Confederate forces.

During the Battle of Island No. 10 and the Siege of New Madrid, the Hunter property was occupied by Union troops preparing to besiege the town. To date, no written documentation has been found to show a direct involvement of the house in these actions. However, Amanda's grandson, Bud, related that the house had been used as the headquarters of Gen. John Pope after the occupation of the city by Union forces. Despite the danger and excitement the war brought, the Hunter family and their home survived the conflict relatively unscathed.

On Christmas Eve, 1874, the Hunter's youngest daughter, Ella, married William Dawson. Upon Amanda's death in 1876, the house was left to the Dawsons, who lived there until their deaths. While in residence, William served three terms in the Missouri State Legislature, and in 1884 was elected to the United States House of Representatives. He also served on the planning committee for the 1898 World's Fair Exposition in Chicago.

Descendants of the Hunter family occupied the house continually until 1958. In 1966, the city of New Madrid purchased the house and a year later donated it to the state for use as a state historic site.

The house still reflects the grand lifestyle enjoyed by the successful "Bootheel" businessman prior to the Civil War. Adding to the significance of the site is the collection of furnishings that came with it. It is estimated that the state received approximately 80% of Amanda Hunter's original furnishings. Several items of the Dawson's furniture and a large part of their library are also preserved in the home. The documentation that survived and remained with the family adds to the importance of the collection. It is believed that the site possesses one of the largest collections of Mitchell and Rammelsburg furniture in the nation.

Today, visitors can tour the Hunter-Dawson home, which has been restored to reflect the period of 1860-1880. It features 15 rooms and nine fireplaces and sits on a shady site.