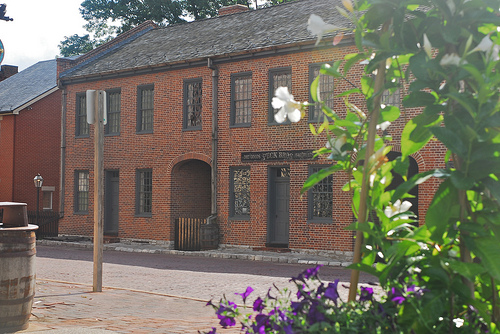 Missouri's first legislators - some of them frontiersmen and others of the gentry - met in the buildings of First Missouri State Capitol State Historic Site in St. Charles to undertake the task of reorganizing Missouri's territorial government into a progressive state system.

Before Missouri was granted statehood on Aug. 10, 1821, various locations in St. Louis had served as the seat of government for territorial affairs. As statehood became a certainty, the search began for a site to become the permanent seat of government. An undeveloped tract of land located in the center of the state overlooking the Missouri River was chosen to become "The City of Jefferson," Missouri's permanent capital.

Until the new Capitol could be constructed, the state's first legislators needed a place to meet. Nine cities competed for the honor of hosting the state's temporary seat of government. One of these cities was St. Charles, a growing center of trade located on the Missouri River with easy access to the most rapidly growing areas in the state via the river or the Boonslick Road. The citizens of St. Charles pledged that if their city was chosen as the temporary capital, they would furnish free meeting space for the legislators.

On Nov. 25, 1820, Gov. Alexander McNair signed a bill making St. Charles the first capital of Missouri. The state's first legislators met in St. Charles for the first time on June 4, 1821. Heated debates over state's rights and slavery filled the rooms of the new temporary Capitol.

The meeting place provided by the citizens of St. Charles was on the second floor of two newly constructed adjoining Federal-style brick buildings. The Peck brothers, Charles and Ruluff, owned one of the buildings and they operated a general store on the first floor. Chauncey Shepard owned the adjoining building with a carpenter shop on the first floor. The second floor of the building was divided and used as Senate and House chambers, an office for the governor, and a small committee room. Four Missouri governors ran the state's affairs from the Capitol in St. Charles until the new Capitol in Jefferson City was ready in 1826.

Starting in the early 1900s, the buildings and neighborhood around the first state Capitol began to slowly decay. The buildings that now make up First Missouri State Capitol State Historic Site were acquired in 1960 by the state of Missouri through then-Gov. James T. Blair. Concerned citizens of St. Charles who recognized the value of the buildings prompted his efforts. The state began a 10-year restoration project that initiated the revitalization of the historic core of St. Charles.

Eleven rooms in the Capitol complex have been restored to their original state, and nine rooms are complete with furnishings from the 1821-1826 period. The Peck brothers' residence and general store have been restored and furnished as they might have looked in the early 1800s.

For a nominal fee, visitors can take a guided tour through the actual rooms where Missouri state government was created and first practiced. Antique furnishings are the type used during the 1820 occupation. The Peck Bros. Dry Goods Store contains examples of merchandise needed in the 1820s, with furs on display to show visitors the importance of the once-thriving fur trade. Admission is free to the historic site's interpretive center, which offers two floors of exhibits, an orientation show and a gift shop.