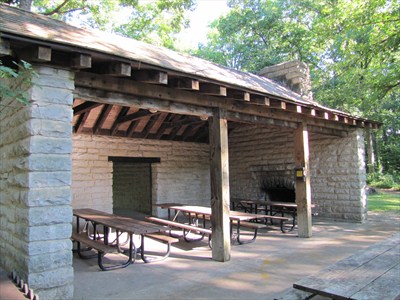 Beginning in 1934, the land that is today Cuivre River State Park was acquired for public use. From 1934 to 1946, the park was a Recreational Demonstration Area under the jurisdiction of the National Park Service. During most of this time, Company 3771 of the Civilian Conservation Corps developed the park and built many of the facilities still in use today. Among the rustic features from the CCC era are the rock bridge on Highway 147 over Little Sugar Creek, the stone picnic shelter, and Camp Sherwood Forest. Camp Sherwood Forest is a group camp that has been in use since 1937 and has 53 original buildings and structures. Virtually the entire camp was designated a historic district by the National Park Service in 1985.