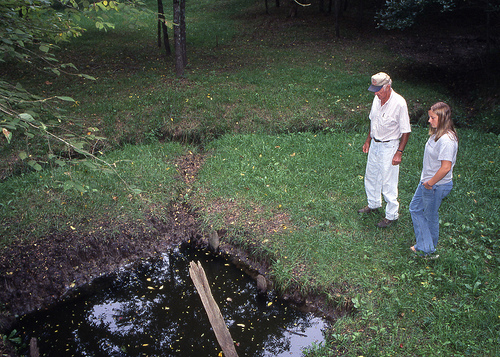 In 1804, explorers Lewis and Clark reported the presence of many saltwater springs in the area that now comprises Howard, Cooper and Saline counties. Wildlife such as deer, elk and bison gathered around these springs to lick the salt from the ground. The largest of these salt springs was the Boone's Lick.

In pioneer times, salt was indispensable for preserving meat and tanning hides. The countryside around these salt springs was considered ideal for settlement and by 1810 had acquired the name "Boone's Lick Country." For many years, it was the primary destination of pioneers moving west.

The famous frontiersman Daniel Boone is often credited with discovering the lick. However, his son Nathan made it clear in an 1851 interview that it was he and his brother Daniel Morgan Boone, and not their father, who were associated with the lick. As early as 1797, the Spanish government in St. Louis awarded explorer James Mackay a land grant of 400 arpents (338 acres) around the salt lick, although the U.S. government later denied his claim for many years.

In 1805, the Boone brothers formed a partnership with James and Jesse Morrison to produce salt. Salt production was a labor-intensive project. Brine water was poured into iron kettles and heated to boiling on a stone furnace. As the water evaporated, salt crystallized in the bottom of the kettle. Approximately 250 to 300 gallons of brine water produced a bushel of salt.

The operation grew from eight men laboring over one furnace and 40 kettles to 20 men operating two furnaces handling 60 kettles each. About 30 bushels of salt were produced a day and were shipped by keelboat on the Missouri River to St. Louis, where it sold for $2.50 per bushel. So much timber was cut to fuel the salt furnaces that wood had to be brought in from as far as 4 miles away.

Daniel M. Boone sold his share of the business in 1810. The threat of war with Great Britain and its American Indian allies loomed in 1812. Nathan Boone was appointed a captain in the Rangers and disposed of his interests in the saltworks. The Morrisons had to abandon the saltworks until peace was made with the warring tribes in 1815.

Several noted Missourians were associated with the Boone's Lick saltworks. William Becknell, a manager at the works, led the first successful trading expedition to Santa Fe in 1821 and took the first wagons the following year. The Cooper family, the first white settlers in the Boone's Lick Country, helped manage the works and brought back the first mules, jacks and jennets from Santa Fe, helping lay the foundation of Missouri's renowned mule-breeding industry.

In 1827, James and Jesse Morrison dissolved their partnership, leaving James in possession of "all salt kettles and tools of every description at the Boone's Lick Salt works." The works were offered for sale in August of 1831, but it remains unclear when the property sold. In 1833, the U.S. government confirmed James Mackay's claim to his heirs. Morrison left the lick, and commercial salt production ceased.

Morrison's son Joseph is buried on the hill above the lick. Some sources indicate he died on Aug. 10, 1833, at the age of 16. Others say he died on March 16, 1828, when he was 11. Accounts of how Joseph died also vary. One tradition says he fell into a boiling kettle and was scalded to death. Another says he died of a fever. Yet a third says he was accidentally shot.

In 1869, there was a short-lived attempt to revive the commercial manufacture of salt. The "Oyster Plan" of 1900 sought to dam the springs to raise oysters and saltwater fish, but the plan quickly collapsed.

Today, the site has picnic facilities and a short, steep trail that winds its way to the spring site where wood remnants of the saltworks and an iron kettle are still visible. Outdoor exhibits interpret this unique saltwater environment and center of frontier industry. Archaeological excavations have uncovered many features of the salt manufacturing industry and some of the artifacts found are on display at the Arrow Rock State Historic Site visitor center in Arrow Rock.