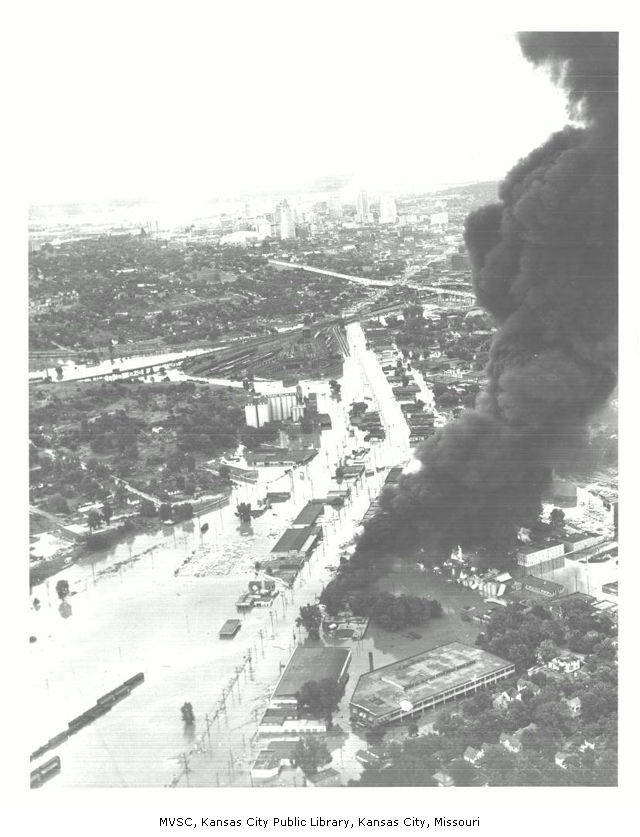 During the summer of 1951, heavy rainfall in the Kansas River basin caused extensive flooding. Some areas received 16 inches of rain from July 9-13. As the crest of the floodwaters rapidly moved down the Kansas (also called the Kaw) River, the cities of Manhattan, Topeka and Lawrence suffered severe damage. Where the Kaw flows into the Missouri River at Kansas City, the crest was 14 feet above flood stage on July 14. The mouth of the Kaw River is in the West Bottoms and Armourdale areas of Kansas City; location of the stockyards, railroads, homes and warehouses, an oil storage facility, and the American Royal. Twenty-eight lives were lost, and total damage was nearly $1 billion (in 1951 dollars). This was the worst flood to ever hit the Kansas City area, worse than the destruction from the more recent 1993 flood. 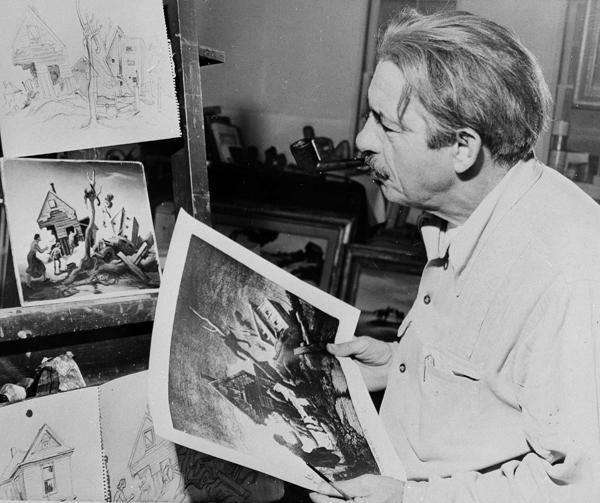 Missouri artist Thomas Hart Benton was at his summer home on Martha’s Vineyard, Massachusetts, when the flood occurred. When he returned to Kansas City at the beginning of October, he was distressed by the destruction. 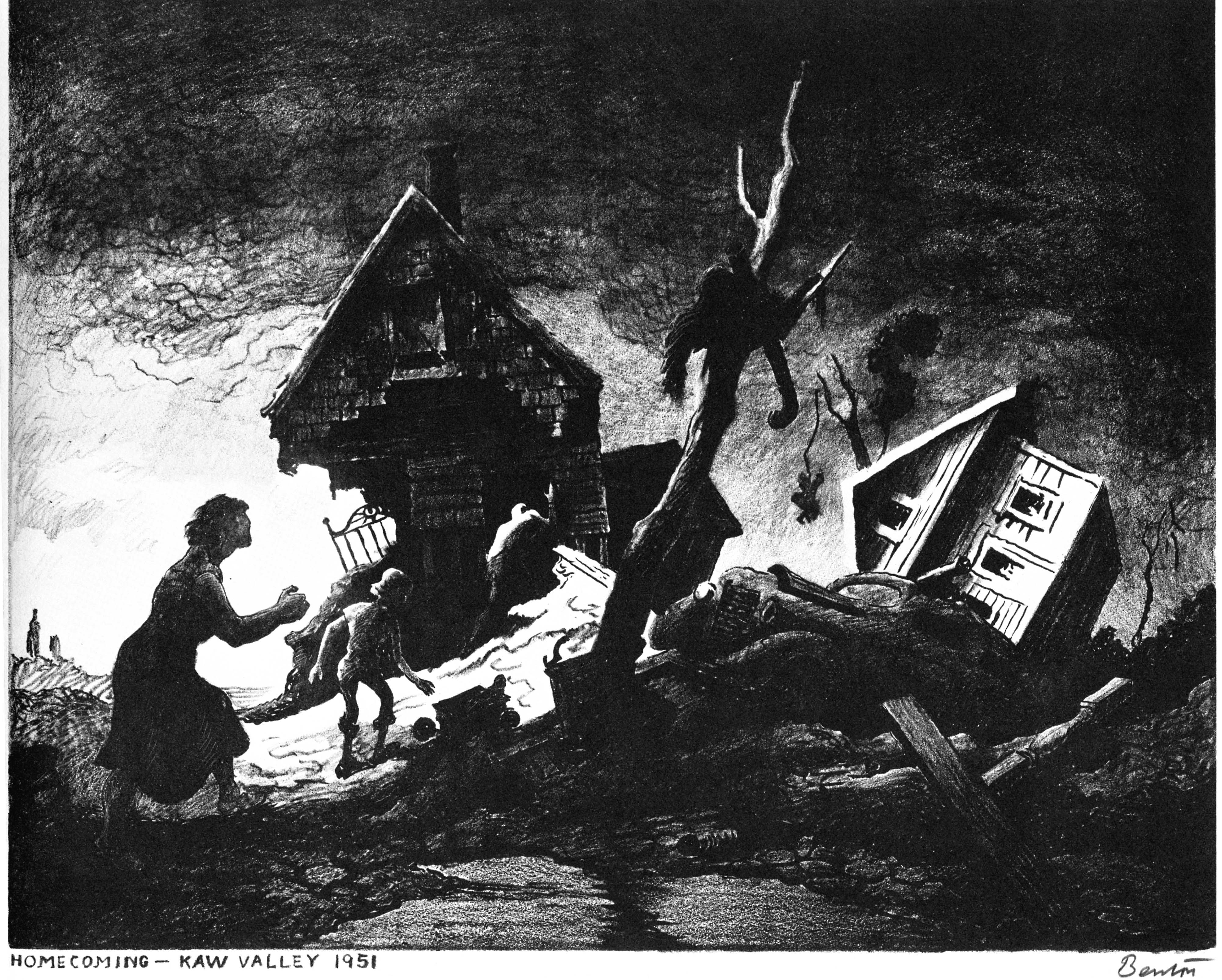 “Down block after desolated block, the muck covered [the] wrecks of their homes. Condemnation signs were tacked to miles of these split and twisted shells of family memory. In moldy underlying crevices and corners, appeared the ruined enamel of stoves, washing machines, bath tubs and the remains of chairs, couches, beds and children's playthings. Here and there in the paling autumn sun men and women pecked at mountains of disaster with shingle hatchets and garden shovels." (Benton – The New Republic, Nov. 19, 1951).

In an effort to draw national attention to their plight,  Benton quickly produced a lithograph titled “Homecoming-Kaw Valley 1951,” and sent one, with the accompanying letter, to every member of the U.S. Congress.

Representative Richard Bolling (D-MO) retrieved several of the flood lithographs from Congressional wastebaskets, and also was given an additional 20 or so of them by 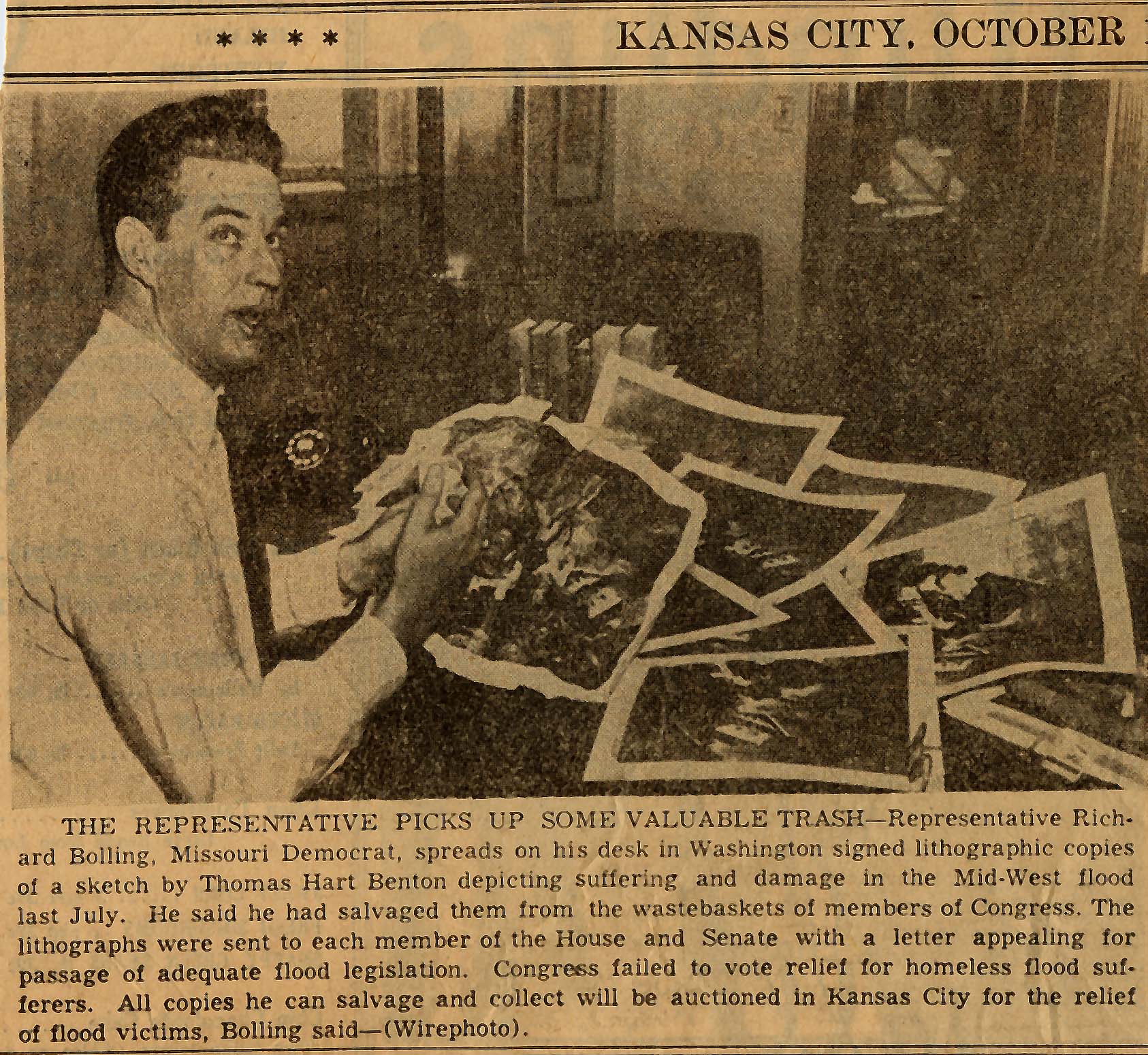 Tom Benton, which were auctioned off for flood relief.

Several members of Congress, and Vice President Alben Barkley, sent reply letters to Thomas Hart Benton, which are reproduced here. Most of the letters were supportive of his efforts; only Rep. Harold R. Gross (R-IA) persisted in his fiscally conservative role as the “watchdog of the Treasury”, sharing concerns about efforts underway at that time to construct a new air base in Grandview, Missouri – which would become Richards-Gebaur Air Force Base – and the tremendous amount of funding being directed overseas.

Congress was debating a bill to provide a national system of flood disaster insurance, and Benton wanted it expanded to assist those who had lost their homes in Missouri and Kansas. The flood insurance portion, and the expanded appropriation, did not pass; although $113 million in flood relief was signed by President Truman on Oct. 24, 1951. Another $55 million was appropriated in May 1952; and Congress later passed the Federal Flood Insurance Act of 1956.

Click on the links below to read the response letters.